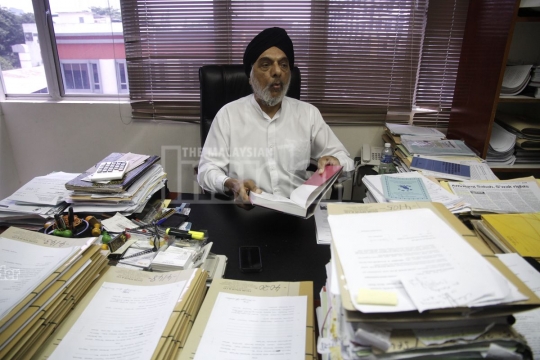 Comments Off on Now, Malaysian Sikhs to SNUB ‘Allah only for Muslims’ court ruling 514 Views

Malaysian: Sikhs will continue to use the word Allah in their religious practices as the word appeared numerous times in their holy scriptures, said the Malaysian Gurdwara Council president Jagir Singh.

“There is no way the word can be excluded since it is found in the Guru Granth Sahib, just like in the holy Quran for Muslims,” he said, adding that Sikhs throughout the world has used the word in the past six centuries.
He said the 350,000 faithful in Malaysia can continue to use the word found in the holy scriptures despite the Court of Appeal decision on Monday when it banned the word Allah from being used in the Bahasa Malaysia section of the Catholic weekly, Herald.

The Sikh scriptures are recited during weddings and home purification ceremonies. There are some 180 gurdwara (temples) in the country, with about 10 in Sabah and Sarawak.

On Monday, a three-man bench which allowed Putrajaya’s appeal to reverse a High Court ruling that the Herald could use the word, said the word Allah was not an integral part of the Christian faith and practice.

The court said it saw no reason why the church was so adamant in wanting to use the word Allah.

It said such usage, if allowed, would inevitably cause confusion within the Malaysian community, and added that the welfare of an individual or group must concede to the majority community.

Jagir, who is also president of the Malaysian Consultative Council of Buddhism, Christianity, Hinduism, Sikhism and Taoism, said the Court of Appeal judgments covered a “wide dragnet”.

“I don’t know how the government and Muslim religious authorities want to enforce the court decision,” he said.

He said there were already state enactments that banned non-Muslims from using the word since Islam came under the authority of state governments.

Jagir said the (Gurdwara) council was also waiting to see how the Home Ministry was going to react to the court ruling.

“But we have always maintained that nobody has a monopoly over the word from the cultural and religious perspective,”