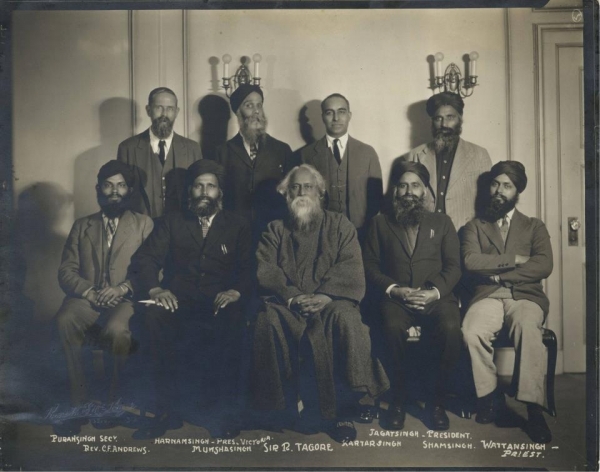 Bengali Poet, Esaa Yist, and songwriter Rabindranath Tagore was a literary giant of the early 20th century, becoming the first non-European ever to win the Nobel Prize in Literature.

And according to local cultural historian Naveen Girn, he dropped by the West 2nd Avenue Sikh temple when he visited Vancouver in 1929.

Girn, research curator of the Surrey Art Gallery, told the Georgia Straight that while Tagore was at the temple (which is now on Ross Street), a photograph was taken of him surrounded by local admirers.

“The community knew he was coming,” Girn revealed. “They brought together different community leaders—some from the island, and from Vancouver, and also Reverend [Charles Freer] Andrews.”

Tagore was aware of Ghadar activists

This year marks the centenary of Tagore winning the Nobel Prize in 1913.

It’s also the 100th anniversary of the creation of the Ghadar party of Indian independence activists along the west coast of North America. Several went back to India to support an armed struggle to try to force the British out of India.

“They passed articles by Tagore, too,” Girn said. “They were very proud of him because he was a Nobel laureate.”

The following year, Canadian immigration officials refused to allow more than 350 South Asian passengers on the Komagata Maru to disembark in Vancouver. The ship was sent back to India, where several were shot by British soldiers.

Tagore renounced his knighthood in 1919 after British Brig.-Gen. Reginald Dyer oversaw the massacre of peaceful demonstrators at the Jallianwala Bagh Garden in Amritsar in 1919.

This official death toll was 379 and another 1,100 were reported wounded. To this day, Britain has refused to apologize for the mass shooting, which was depicted in Attenborough’s film.

Nehru also dropped by the temple

Girn said that Nehru also spoke at the West 2nd Avenue gurdwara during his visit.

“He talks in the speech about the assassination of Gandhiji [Mahatma Gandhi], partition, and how South Asians living in Canada need to take an active life in Canadian life and not to ghettoize themselves. So before [Pierre] Trudeau, he’s talking about this idea of multiculturalism and how people should live together.” 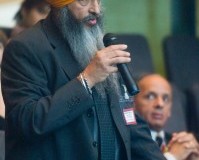 Statue or no Statue, the cat is out of the bag as far as Gandhi is concerned: Sikh Federation UK