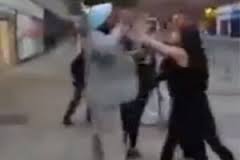 No bail for UK girl charged with Sikh man’s assault

London, UK: A British court has rejected the bail plea of a teenaged girl caught on video punching an 80-year-old Sikh man in the face and shoving him to the ground.

Coral Millerchip, 19, was arrested on Friday and charged with assaulting the man at Coventry, a city northwest of London.

The British girl appeared before the Coventry Magistrates’ Court on Monday and has been remanded in custody till November 25.

According to local media reports, defence lawyer Shane Hennigan’s plea that the accused be tried in the magistrates’ court was also turned down and it was ordered that she appear before the Coventry Crown Court, which is designated for more serious offences.

Millerchip was arrested from an address outside West Midlands after the police received reports that the Sikh man had been attacked in the Coventry city centre on August 10. She was traced to an address in Gloucester and taken to a West Midlands police station.

The elderly victim was punched in the face and pushed to the ground, leaving him with a bloodied nose and black eye.

Millerchip was also seen spitting on the victim and verbally abusing him.

A video of the assault, recorded by a passerby on a mobile phone, was widely circulated on the social media and created worldwide outrage.

Meanwhile, the Coventry police have also urged anyone who shared the video or still images of the assault to remove them from social media accounts as these could hinder the inquiry.

Previous: Sukhbir may put off Canada visit
Next: Book on Sikhs’ role in World War-I released