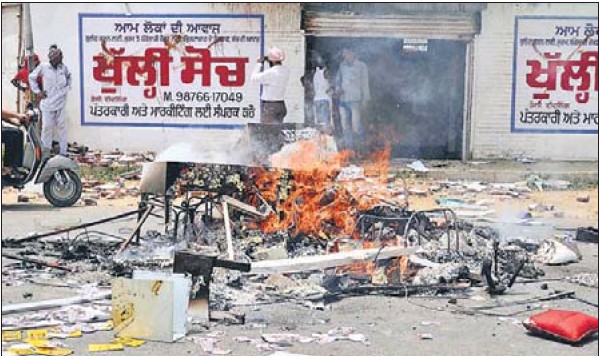 The protesters staged a dharna and demanded immediate arrest of its publisher Rajesh Sharma. They also set the office of the daily afire.

The incident took place when Chief Minister Parkash Singh Badal was in the city in connection with a state-level function. However, the police reached the spot and brought the situation under control.

An article and objectionable pictures of the first Sikh Guru published in the vernacular daily sparked protest. “The right to expression does not give anyone the right to hurt the religious sentiments of a community,” said one of the protesters.

The SHO, Daba, said the situation was under brought control and legal action would be initiated against the publisher of the vernacular daily.

Rajesh Sharma had published a controversial picture of first Sikh Guru which is currently being circulated at Facebook and Twitter.

The police has booked Rajesh Sharma under Section 295 of the IPC for hurting the religious sentiments of a community.

Previous: CBI moves HC over Sajjan’s acquittal
Next: 1,000 trees to be axed for four-laning project