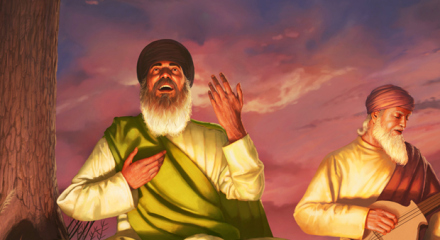 “Men (and women) from all over the world and throughout history have been in search of pleasant sites and sounds, tastes and sensations, and attitudes. They noticed that even in the best of times, without sickness, death and horrors of old age, happiness and pleasure could only be felt temporarily by having to repeat things like eating delicious food, having professional success and celebrating festivals. Many over the ages accepted this as a fact of life, and lived their lives around reiterating this temporary relief.

However, some began to wonder whether there was a form of happiness that was not dependent on having one’s family and friends within arm’s reach, or taking all kinds of drugs

My painting of Guru Nanak has been painted differently than previous paintings of him. I have shown him smiling while singing kirtan. Something that is rarely seen in paintings of Guru Sahibs. In this painting, I tried to contrast moods and emotions in the background and foreground. It is possible to be happy while going through bad experiences. With this painting, one can see that the sky is in turmoil, in utter chaos. The randomness of the clouds, and the angle at which they split the sky really shows that.

I contrast this with the calm atmosphere of the sangat, who are either focused on the kirtan and are enjoying it, or observing Guru Nanak Dev ji closely with curiosity (as the Brahmin is doing). The members of the sangat include a woman, one member of an upper caste, another of a lower caste and a Hindu Brahmin priest, sitting together. Such a feat was accomplished by the Gurus.

Guru Nanak Dev ji is the embodiment of bliss; his smile represents that. It is important to view this painting in a specific way to appreciate the effort that has been put into it. When you look at this piece, as it hangs on the wall, just focus your attention on Guru Sahib’s face, his gestures and energy. Ignore any thoughts you have, and turn all your attention to Guru Sahib. When you do so, after some time the clouds will blur, the sangat will partially blur, and Guru Nanak Dev ji will appear to radiate through the painting. The happiness that he represents just radiates outward from Guru Sahib. This brings peace to the mind, and promotes positive feelings of joy.

This way of seeing this painting, in itself, is meditative. I mention it to highlight the importance of meditation in changing our perceptions, and further diminishing our ego. Guru Sahib points to himself, as he stresses this. The focus of meditation is our own ego, not of others. With the other hand, he gestures towards the heavens, at the power that is manifested in them. This is power that we channel through to rid ourselves of our ego and everything that our ego is manifested in: greed, pride, anger and so on. This reduction of negative emotions then promotes the flowering of positive emotions like happiness, as seen in Guru Nanak Dev ji himself.

I also want to direct your attention to the cobra under the tree. This is reminiscent of the tale when the young Nanak was resting under a tree, one afternoon. As time passed, the shadow of the tree had moved away from Nanak. A cobra came around and with its hood, it provided shade to the young boy. At least, this is how this tale it told. It is said that the head of the village was passing by when this happened, and when he saw this, he knew Nanak was a very special boy.

Speaking about wildlife, when I was very little, I thought fireflies were magical little beings. Everytime, the lights went out in my old home in India, the fireflies would come out. Their glow always brought out my curiosity and filled me with a sense of wonder. I thought they would go well with my subject matter.

TheSikhWire Comments: We would encourage young and old artist to use halo for our Guru Sahib images.

2013-01-01
Guest Writer
Previous: US DEPARTMENT OF STATE INTERVENES TO SAVE BADAL IN US LAWSUIT
Next: Ban Foul Language at Religious Places: Akal Takht Jathedar