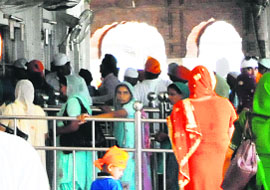 Amritsar, Punjab: Devotees visiting the Golden Temple will no longer have to stand in long queues for getting ‘parshad’ as the SGPC plans to open 23 new counters, including 15 for ‘karah parshad’ and eight for ‘pinni parshad’, at the Golden Temple Complex very soon.

At present, there are only three counters for the ‘karah parshad’ and two for the ‘pinni parshad’, which witness long queues of devotees, particularly during the peak tourist season.

Darbar Sahib manager Jawahar Singh said they intended to open 15 counters of ‘karah parshad’ and four of ‘pinni parshad’ to facilitate the devotees.

Apart from this, they would be opening four more counters of ‘pinni parshad’ near Ber Baba Budha Sahib, which would help the devotees take it along while making an exit from the holy shrine.

He said the ‘kar sewa’ was already underway on full swing and the work would be completed within a month.

He said the sale of ‘pinni parshad’ was increasing day by day.

The ‘pinni parshad’ is fast gaining popularity among the pilgrims after being launched on October 8 last year on the occasion of Guru Ram Das birth anniversary.

The facility (‘pinni parshad’) was started as the pilgrims from far-off places used to complain that they could not take ‘parshad’ from the holy shrine for their near and dear ones.

Meanwhile, the SGPC’s move to renovate the ‘parshad’ counter area seems to have added to the pollution which is visible on roof and walls of the verandah alongside the ‘parikarma’, as the hearths on which the ‘parshad’ is prepared have been shifted a little from their original position.

The roofs and walls in the verandah have started turning black which is a clear indicator of the effect of shifting hearths.

On the other hand, the manager said they would ensure proper restoration of the area damaged due to shifting of hearths
near the ‘parshad’ counter area.