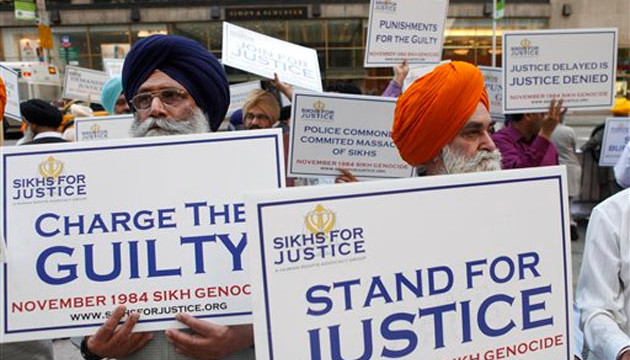 Amritsar, Punjab: The ” genocide petition” submitted by Sikh groups to United Nations Human Rights Council (UNHRC) on November 1 seeking investigation into the riots against Sikhs in 1984 and declaring these are “genocide” now has support from politicians of more than dozen countries.

Harry van Bommel, Member of Parliament for the Socialist Party in The Netherlands, issued a declaration supporting the pending “1984 Sikh Genocide” complaint before the United Nations Human Rights Council (UNHRC) and demanded that the perpetrators be brought to justice – whether they are political leaders, police or government officials. “I am convinced that this petition will bring this goal nearer. For justice, it is never too late,” he said.

“It is of extreme importance that an investigation by the UN can finally get to the facts about the massacre, though it is scandalous that India, 29 years after the fact, has not been able to deliver these facts itself. Even worse is that the proven involvement of Indian authorities in the killings of many thousands innocent men, women and children has not lead to convictions of those responsible,” Netherlands MP said in the strong worded declaration.

“It is a big shame and unacceptable that today victims of this horrible episode in the history of India still wait for justice to be done,” Bommel’s statement in support of the petition said.

Notably a former minister and a former MP are still facing trial in the cases related to November 1984 massacre amid the allegations that justice had been delayed and denied in the last 29 years as the government machinery worked to save them and other high profile accused.

It may be recalled here that on November 1, a complaint was filed with UNHRC pursuant to resolution 5/1 urging it to investigate the systematic, intentional and deliberate killing of Sikhs carried out across India during the first week of November 1984 and to recognize these attacks as “genocide”. The complaint was filed by Sikh groups including “Sikhs For Justice” ( SFJ), All India Sikh Students Federation ( AISSF), Movement Against Atrocities & Repression (MAR) and Gurudwara representatives across Europe and North America. The Complaint is likely to come up before the UN’s “Working Group on Communications” by August 2014.

Meanwhile, Sikhs For Justice (SFJ) legal Advisor Gurpatwant Singh Pannun announced that the rights groups would approach member countries of UN Working Group to urge them take up the complaint and hold hearing to allow the 1984 victims to present evidence related to Sikh Genocide.