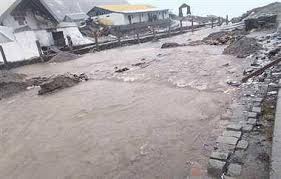 NCM seeks info on loss in Sikh shrines of U’khand

Ajiab Singh, member of NCM has written a letter to the chairman of UKMC Narinderjit Singh Bindra in this regard.

“NCM has been receiving reports of heavy loss of life and property of Sikh devotees who were visiting Hemkunt Sahib, Govind Ghat and Govind Dham Gurdwaras,” Ajiab wrote in the letter to Bindra.

xpressing worries on the loss, the NCM member said “It is reported that more than Rs 1.5 crore worth of ration belonging to Gurdwaras, more than 200 cars and a huge block used to accommodate devotees, have been completely washed away.”

“The actual extent of damage be ascertained first and a report be sent in order to enable the Commission to make recommendations to the Centre and state government for compensation to victims,” Singh wrote.

Bindra, meanwhile, acknowledged receiving the letter and said reports have been sought from district magistrates and commissioners of the divisions in Uttarakhand at earliest so that they can be submitted to NCM.

“We will file a consolidated report within a fortnight,” Bindra said over phone from Dehradun.