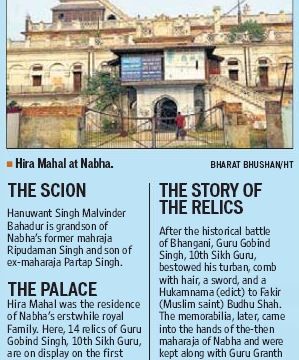 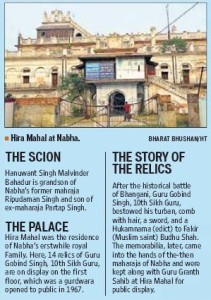 Patiala, Punjab: The palace keeping the relics of Guru Gobind Singh was sold by fraud and looted. The royal scion and a leading industrialist are accused.

Hanuwant Singh Malvinder Bahadur, scion of the erstwhile Nabha estate, sold 18th-century Hira Mahal, once a royal abode, to Om Parkash Jindal, whose company here supplies parts to Maruti. By the will of Hanuwant’s father, the property belongs to two trusts, one of which runs the elite Punjab Public School, Nabha, and the other the gurdwara where the sacred artefacts are on public display.

Before the country became independent in 1947, Nabha was one of seven Sikh princely states. After the death of its eighth maharaja, Partap Singh, on July 22, 1995, his son, Tikka Hanuwant Singh, inherited all his property except the ground floor of Hira Mahal given to Maharaja Partap Singh Trust to run The PPS, Nabha; and the first floor given to Gurdwara Siropao Darbar Trust.

The land alone is worth 50 crore; while the paintings, silver palanquin, and other artefacts related to the Guru, some of which are missing, are invaluable.

Police are tight lipped about the details, as the purchaser, Om Parkash Jindal, is close to many Bharatiya Janata Party (BJP) ministers in the state.

Already, he faces three landfraud inquires. “Jindal and his son are under arrest and the hunt for the other accused is on,” was all that senior superintendent of police Hardial Singh Mann could say.

The original complaint was filed in 2009 but the first information report (FIR) has come only now. Right to Information (RTI) activist Gurmel Singh had started it as a fight for restoring the Guru’s relics but, during the course, it turned out to reveal land fraud. Afterv Hira Mahal was transferred to the trusts, Hanumant Singh allegedly got his lawyer Ramesh Chand to make fake papers to claim ownership, and in 2002, sold palace as “agricultural land” to Jindal and his family.

2013-10-30
SSNews
Previous: No Diwali cheer for Punjabi farmers in Kutch, Gujrat
Next: Sikh rule artefacts to be auctioned