Faridkot, Punjab: The police and civil administration are treading cautiously after the Dhudike clash between radical Dera Sacha Sauda followers and Sikhs.

The police and senior leaders of the area are trying to mollify the warring groups. Senior Akali leader Tota Singh, who was camping in Delhi for the past many days in the runup to the assembly elections there, rushed to Moga today.

He met leaders of Sikh groups. He will also be meeting radical dera premis to broker peace.

Jawinder Pal Sharma, Deputy Superintendent of Police (DSP), Faridkot, who led a police party to Sadhanwala village yesterday, said the police would not allow interference in religious affairs by any group. The ruling SAD’s stakes in the Malwa belt are high. With parliamentary poll round the corner, it can ill-afford to antagonise radical Dera premis in the area. At the same time, it also wants to keep Sikh groups in good humour.

Tota Singh said he had met novelist Jaswant Singh Kanwal. “He is respected by all communities and can play a role in maintaining communal harmony”, he said. The Akali leader said the village residents wanted to sit together and find an amicable solution.

Sources close to Deputy Chief Minister Sukhbir Singh Badal said District Magistrate Arshdip Singh Thind would be asked to hold a probe into the incident. However, the latter said he had not yet received any such instructions.

Previous: Sikhism becoming global religion: US don
Next: Pollution around Golden Temple to be curtailed 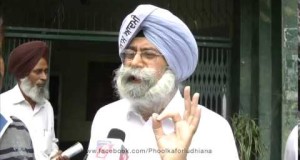