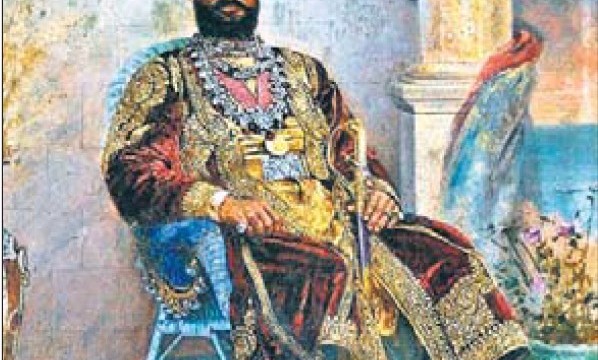 Faridkot, Punjab: 1885 sketch missing since October 2010; police claim to have leads. Police have formed a Special Investigation Team to look into the case of a missing 1885 hand-made painting of the erstwhile Maharaja of Faridkot Balbir Singh.

The disappearance of the painting was noticed in October 2010 at the Lal Kothi in the town, which had housed it for years.

The building was being used as an official accommodation by judicial officers.

A senior judge at Faridkot noticed the missing painting an on inquiry, it appeared that another judicial officer could have had a hand in the painting’s disappearance.

A case of theft was registered at the Faridkot city police station against unknown people on September 17, 2012, on a complaint by the chief judicial magistrate.

“We are looking into the facts. We have some leads in the matter,” said Faridkot senior superintendent of police Gurmeet Singh Randhawa.

“We might even seek the help of Interpol, once it confirmed that the painting is indeed out of the country. The case will be cracked soon,” Randhawa said.

It is important to state that the painting was allegedly sold in an antique market in London for over Rs 35 lakh, recently.

The police are looking out for suspects who reportedly went to the country during that period.

“The painting might have been sent abroad through courier, however, this is yet to be established,” said a police department source, on the condition of anonymity.