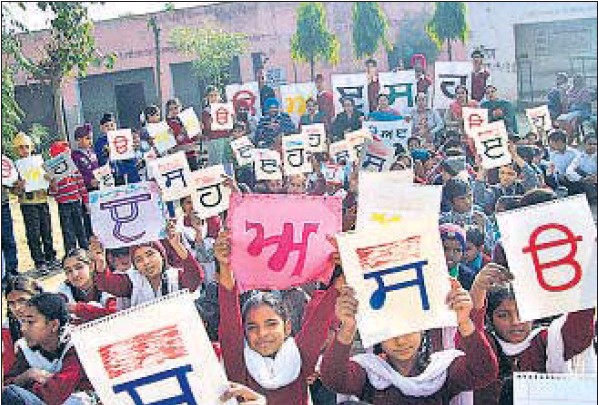 Chandigarh, Punjab: That kids today pay more attention to music than the written word is a grudge shared by teachers and parents alike. However, a local teacher has used this very predilection to teach the younger generation a language that is fast losing its popularity with them – Punjabi.

Karamjit Singh Grewal, also a recorded singer and an award- winning author, has created a song ‘ Aao Punjabi Sikhiye’ that makes learning ‘ Uda Aida’ a fun ride. The song is a recorded single that is rising up the popularity index by the day.

This innovative teaching effort is one- of- its- kind in the state. Grewal, who teaches at the Government High School, Kheri Jhameri, says that he always felt disappointed and troubled with the way his students entered the school.

“Reluctant, crying and sometimes howling: this is how the kids often entered the school. I then came up with this idea, knowing how kids today are fond of music and videos. I hoped music would arouse their interest in learning and it worked,” says the 35- year- old teacher, who has been into teaching for over a decade now.

This is how the lyrics go, weaving all the 41 Punjabi alphabets. Grewal’s efforts were supported by the headteacher Harjinder Kaur. The song was an instant hit and, seeing the warm response, a local music company, GPM Studio, approached the teacher and recorded the song.

” The five- minute song contains the first five alphabets till Haha. We plan to release the rest of the song in turns,” says Grewal. The song has been aired on all the major Punjabi music channels ever since it was released a couple of weeks ago. The video of the song was shot at the school at which Grewal teaches, featuring his students.

Grewal hails from Lalton village and has a number of recorded solos to his credit. His lyrics revolve around social issues, such as female foeticide.