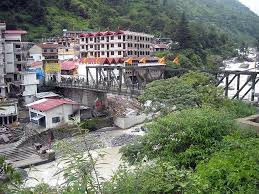 Uttrakhand: India (June 18, 2013): According to media reports, Narinder Jeet Singh Bindra, Chairman of Uttarakhand Minorities Commission, said today that the main building of Gurdwara Sahib of Gobind Ghat in Uttarakhand is safe and none of the Saroops of of Guru Granth Sahib were lost due to rains as was feared.

According to a news reported on the website of Zee News: “Bindra, who is also the Vice Chairman of Sri Hemkunt Sahib Management Trust (SHSMT), claimed over phone that there was no loss of life reported so far, even though many vehicles have been washed away”.

It is notable that there were some reports in media bout the loss of Saroops of Sri Guru Granth Sahib but refuting the media reports Bindra reportedly maintained that “there is no loss of ‘Birs’ of Guru Granth Sahib, we have shifted Birs to higher places.”

He also refuted the reports about Darbar Hall of Gurdwara Gobind Ghat being washed away.

As per reports Bindra confirmed that few rooms of Gurdwara complex were washed away and main building the Gurdwara Sahib is safe as it is on higher place.