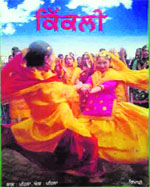 Comments Off on Magazine launched to promote Punjabi literature among children 1,575 Views

Ludhiana, Punjab: “Although the number of books being published in Punjabi has been increasing, the number of literature enthusiasts has declined sharply,” said Manjit Singh Rajpura, editor of a newly released children’s magazine, “Kikli”.

Rajpura was in the city after releasing the first volume of the magazine at a book fair at Moga yesterday.

He said in order to promote the Punjabi literature among the masses, the roots needed to be strengthened.

“Children’s literature, therefore, should be published on a priority basis,” said Rajpura.

The editor said these types of initiatives were the need of the hour.

“The United Nations Organisation has listed the Punjabi language in the endangered languages list. We have to be serious about the future of the language. The language of Baba Farid, Guru Nanak, Sah Husain, Waaris, Shiv Kumar and Mohan Singh is in danger. So, with the efforts of Punjabi Satth and Chak Sataran Publication, we initiated this magazine,” said Rajpura.

Darshan Singh Banur said the mother tongue was the best medium to gain knowledge in childhood.

“With the emergence of the Western system of schooling, the mother tongue got marginalised. We need to be rooted in our culture; therefore, we welcome this initative,” said Banur.

Punjabi Sahit Akademi president Gurbhajan Singh Gill said, “I remember during my childhood, the primary school I attended at my village had subscribed to around 10 children’s magazines. Today, however, schools are not subscribing to a single magazine due to the scarcity of funds. The government is not supporting the language.