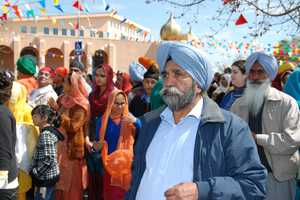 Livingston, California: Livingston will burst with color Sunday as the city’s Sikh residents dress in their traditional clothes for their annual Sikh parade, officially known as the Hola Mohalla festival.
The parade will start around noon at the Gurdwara Sahib Temple at 2765 Peach St. and then move along Main Street to the Guru Nanak Temple on B Street before looping back again.
Hola Mohalla, translated as mock fight, is an Indian tradition that dates back more than 300 years. In the 1700s, Sikhs marched from town to town, showing off their fighting skills for crowds of onlookers.

Today, in the valley, the parade carries much of its traditional flavor, but all are encouraged to attend as a way to experience the local Sikh culture.
The event usually draws about 3,000 people from the valley and the Bay Area. No one can ever predict exactly what the parade will bring, but sword fighting displays, traditional food items and traditional clothing are common attractions.
There’s a 70 percent chance of rain Sunday with a high-temperature of 70 degrees, according to the National Weather Service.
However, Livingston Mayor Pro Tem Gurpal Samra said the event will be held rain or shine. He doesn’t expect rain to detract too much from the crowd.
“If you’ve never seen this before, you’re in for a treat,” Samra said. “Free food and drink and everything else. Come join the festivities — have fun.”
Sikhism is a religion that was founded in India. It has 27 million followers, with more than 5 million of them living outside India. Sikhs make up nearly 20 percent of the Livingston population.