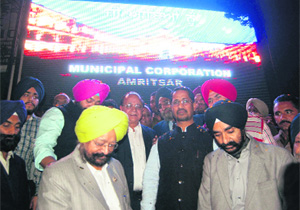 Comments Off on LED screen installed near Golden Temple 516 Views

Amritsar, Punjab: In a first, the Municipal Corporation has installed a huge LED display near the most-visited, highest Sikh pilgrimage centre, the Golden Temple, to project Amritsar at a glance.

The display will provide all details of significant spots, including religious or historical, besides flashing updates on flights, bus and rail timings to tourists.

The screen will also update the visitors about any upcoming events scheduled in the holy city.

Information about tourist destinations in and around the holy city has been fed in the LED, yet the transport timings and any further changes will be monitored through computerised terminals.

The display costing about Rs 10 lakh has been sponsored by a city-based jewellery house. Elaborating further, MC Commissioner DPS Kharbanda said not a single penny had been spent by the MC, as it was a cent per cent sponsored venture.

“We have engaged a Chandigarh-based company which would operate this display screen online. Whatever will be the updates in the information, it will be conveyed to the firm concerned, which will feed the matter accordingly”, he said.

“Besides, we will also update information about VVIP visits or any religious, social events or exhibition etc. scheduled here. We would also inform about places of interest, the distance and the various transport modes to reach the destinations, etc,” he added.

This LED display screen will be monitored and fed through the computer terminal installed on the Golden Temple premises. Mayor Bakshi Ram Arora said once it was fully operational, it would be a boon for the residents especially tourists visiting from abroad or other states as they would not be fleeced by taxi and auto-rickshaw owners.

Previous: Kirpan case: Partial victory for petitioner
Next: Ticket to Sajjan’s son to be cited in US complaint against Sonia