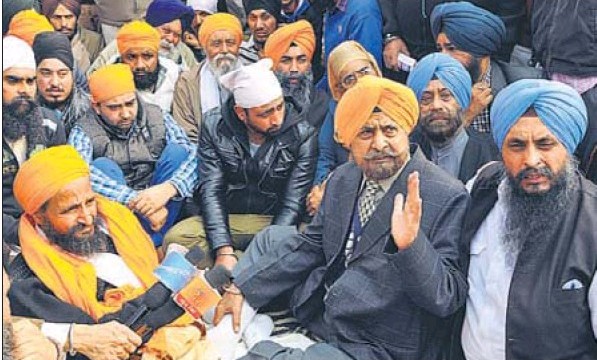 Chandigarh: As the fast-untodeath by for mer militant Gurbaksh Singh Khalsa, who has received support from radical and Panthic groups, entered the 35th day, Shiromani Gurdwara Parbandhak Committee (SGPC) president Avtar Singh Makkar on Wednesday said the fast was “not legal”.

Talking to HT, Makkar said the fast at the SGPC-managed gurdwara was not the right step. Khalsa has been sitting on the fast-unto-death at Gurdwara Amb Sahib at SAS Nagar, which is managed by the SGPC, in a makeshift tent put up in the parking of the gurdwara.

On Monday night, the SGPC objected to the tarpaulin cover on the tent put up by Khalsa’s supporters.

Khalsa has been demanding the release of six former militants languishing in different jails despite having completed their sentences.

“We sympathise with Khalsa and those lodged in jails. We are pondering the issue and hopefully will find a way out soon,” said Makkar, adding that the Punjab government could not do much as all the cases were registered outside Punjab.

Makkar’s comments are in contradiction to Akal Takht jathedar Giani Gurbachan Singh’s view who, while supporting Khalsa’s demand, had asked the SGPC to help resolve the issue.

Meanwhile, five people, including Khalsa’s wife Jasbir Kaur, left for Amritsar to hand over his will to the Akal Takht jathedar. Khalsa refused to divulge the details of his will saying he had made up his mind to give up his life for the cause. He has also offered to donate his organs.

Makkar had met a close aide of Khalsa last month and had offered to take up the matter with the Punjab government. Sources said the parleys did not reach a conclusion.

Five close aides of Khalsa who have formed a morcha on Wednesday met chief minister Parkash Singh Badal to discuss the legal way out. Badal was informed that the state government had objected to parole to three of the six former militants lodged in the Burail jail.

Badal said he was not aware of any such move. “The CM has assured us to resolve the issue at the earliest,” said Harpal Singh Cheema, chairman, Sikhs for Human Rights, who was among those who met Badal.

“The Punjab government can get all of them released in one day in case they have a strong will. But there is no one to take up their case at the political level,” said Cheema, adding that all those languishing in jails and having completed jail sentence were from humble families and were no threat to society.

A total of 124 Sikhs were languishing in different jails but they had demanded the release of only these six as they had completed their jail terms, said Cheema.

A five-member committee of the Delhi Shiromani Gurdwara Management Committee ( DSGMC) met Khalsa and the Punjab gover nment on Wednesday for a way out.
Those who met Khalsa and assured him support included Avtar Singh Hit, Paramjit Singh Rana and Tanvant Singh.

Speaking on phone, DSGMC president Manjit Singh GK said the committee would offer all legal support to Khalsa and the militants lodged in different jails who had completed their sentences. “The SAD will take up the issue with all the states where these militants are lodged,” he added.

Meanwhile, a group of supporters of Khalsa have reached Lucknow to meet Uttar Pradesh chief minister Akhilesh Yadav to take up the case of the release of 73-year-old former militant Waryam Singh lodged in Bareilly jail. Waryam, who is in jail for the past 23 years, has gone blind and was never allowed bail or parole.