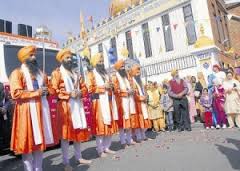 Comments Off on Khalsa parade attracts thousands in Toronto 443 Views

While it still has the same sense of community as in the past, the event is much larger.

Singh, 40, brought his wife, Karen, and their two daughters — Saihaj, 7, and Inaam, 3 — from Unionville to the 28th annual Khalsa Day parade Sunday to commemorate , the Sikh New Year. It’s Singh’s hope to pass on the same experiences he had to the next generation.

“It was just amazing to see that many Sikhs together at one spot,” Singh recalled. “You’re talking about the late ’70s and early ’80s when you’d be lucky if you saw a Sikh, you’d cross the road to greet him. It’s different now.”

In fact, Toronto organizers estimate the two-hour colourful event has grown from 2,000 people since its inception in 1986 to become to city’s third-largest parade of up to 100,000 participants.

Thousands of Sikhs, mostly wearing traditional orange headscarfs, followed the lead of a jewelled carriage containing the Guru Granth Sahib — the Sikh holy book — along Lake Shore Blvd. W. until they reached City Hall, the final destination of the parade.

Drummers and martial artists demonstrating combat with swords and sticks were all part of the celebration.

“This is the day Sikhs were baptized and ordained to be pure to Khalsa,” said event coordinator Manjit Parmar, of the Ontario Sikhs and Gurdwara Council.

“Yes, the (population) has to do with (the attendance growth), as well as the sense of community. This is not just a Sikh event. People from all walks of life attend.”

As part of the baptism ceremony, Khalsa Sikhs promise to wear the “Five Ks” — articles of faith

“We celebrate at home and at temple and we come out and celebrate in the parade every year,” said Mandip Bains, 29, a parade spectator from Brampton.

“It means you get to celebrate being part of a great culture, great religion, and to be in Canada to celebrate this is really special.”

Parmar emphasized the event did not have a political theme.

“They’re greeting the community on behalf of their constituents. They’re not there to promote their agendas,” he said.