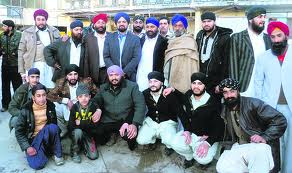 “At that time protests, candle marches were organized by people particularly youth against the gang rape of a girl in Delhi. But no one raised voice when two girls were raped and murdered in Shopian. We wanted to reach to people of other states and tell them what is happening in Kashmir,” said Bupinder Singh.

During their 55-day journey Bupinder said that they tried to reach out to youth and apprised them about grievances of Kashmiri youth about education, unemployment, hostile conditions due to presence of armed forces.

“We told them that Kashmiris are intelligent and talented and can prove mettle in any filed. They should look at Kashmiri youth beyond pelting stones,” they said.

The duo undertook the journey from Kashmir to Kanyakumari via Gujrat, Mumbai, and Kerala and returned through West Bengal, Bihar, UP, Uttarakhand, Himachal Pradesh and reached Kashmir on February 26.

The duo said they organized seminars and interaction sessions with youth of dozens of colleges across the country and apprised them about the grievances of Kashmiri youth.

Bupinder is a teacher at a school in Kralpora Budgam and is simultaneously pursuing his Master’s degree in English from IGNOU while Harminder is pursuing B.Tech in a college in Chandigarh. Bupinder is all praise for students and college administration of different states for allowing them to conduct interactive sessions, “They were very supportive and eager to hear our story,” they said.

2013-03-12
Guest Writer
Previous: Gurdwaras organize akhand path for 13 bus accident victims
Next: Debate on Wednesday 13 March 2013 at 9.30am in Westminster Hall about the British Sikh community