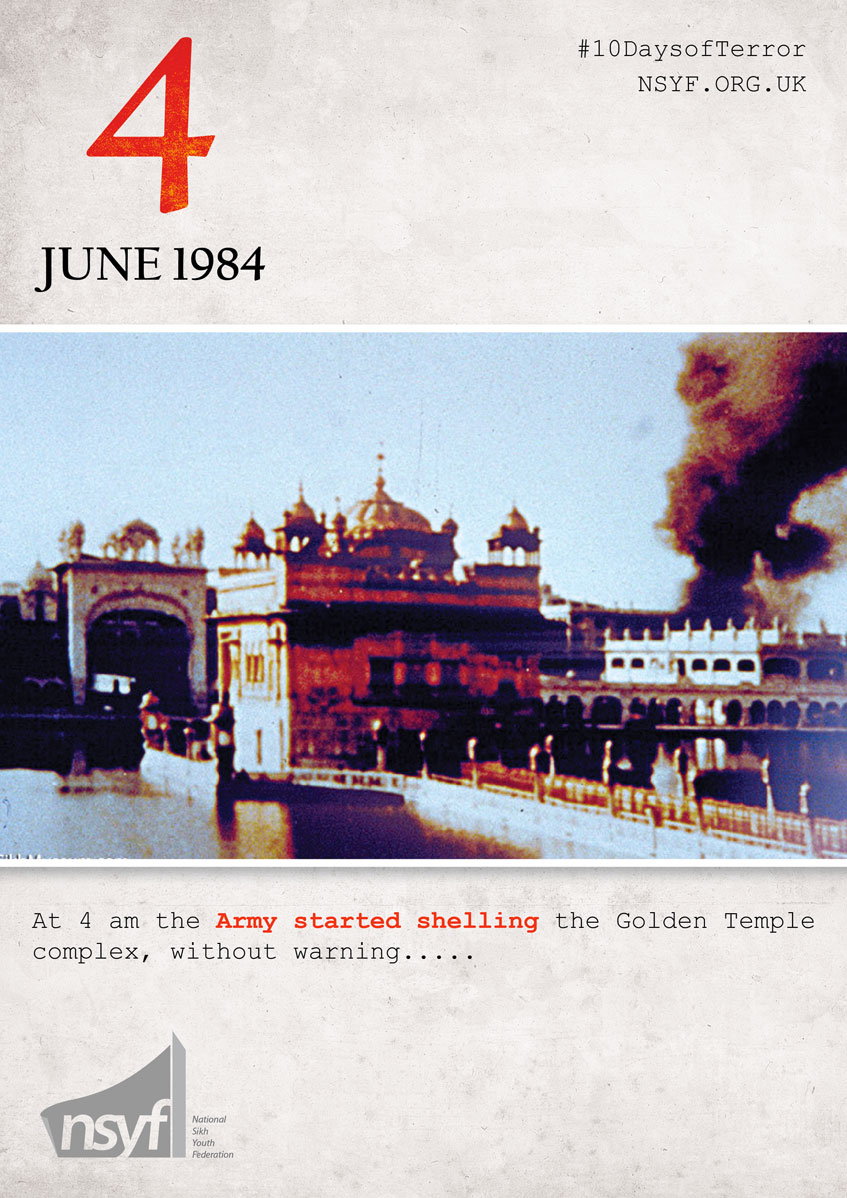 At 3.30am pilgrims were reciting the divine prayers of Sri Sukhmani Sahib, at approximately 4.00am, during the prayers, the Army suddenly began bombing the Sri Darbar Sahib (Golden Temple) Complex using heavy artillery.

“The 4th of June, 1984, was wrongly chosen by the Army for an attack on the Golden Temple because, the 3rd of June being gurpurab (a religious festival), a large number of pilgrims, nearly 10,000 in number, had come to stay in the Golden Temple. Many of them appear to have been killed in the Army action.”

Devinder Singh Duggal – In charge of the Sikh Reference Library located inside the Golden Temple complex. Duggal is an acknowledged authority on Sikh history. Duggal’s recollections are vivid, almost photographic:

“At abut 4 a.m. in the early hours of the morning of June 4, the regular Army attack on the temple started with a 25-pounder which fell in the ramparts of the Deori to the left of Akal Takht Sahib with such a thunder that for a few moments I thought that the whole complex had collapsed… Thereafter, every second the ferocity of firing increased…”

Apart from heavy firing from Light and Medium Machine Guns (high caliber guns), the army troops also threw mortar shells and poisonous gas canisters inside the Akal Takhat and other buildings in the Complex.

Meanwhile, according to Duggal, “the helicopter hovered above and continued to fire from above. Some of these helicopters also guided the firing squads of the Army by making circle of light around the targets. Immediately after these circles, the cannon ball would land causing havoc. We saw a large number of boys blown to pieces.”

Source; Citizens for Democracy; Report to the Nation: Oppression in Punjab (Bombay, 1985)

(This report was made by an investigation team lead by Justice V. M. Tarkunde who was a prominent Indian lawyer, civil rights activist, and a distinguished judge. A day after publication of the report it was banned and confiscated, the authors were arrested and charged with “sedition” (incitement of rebellion against a government); http://www.pucl.org/admin/know_pucl.pdf