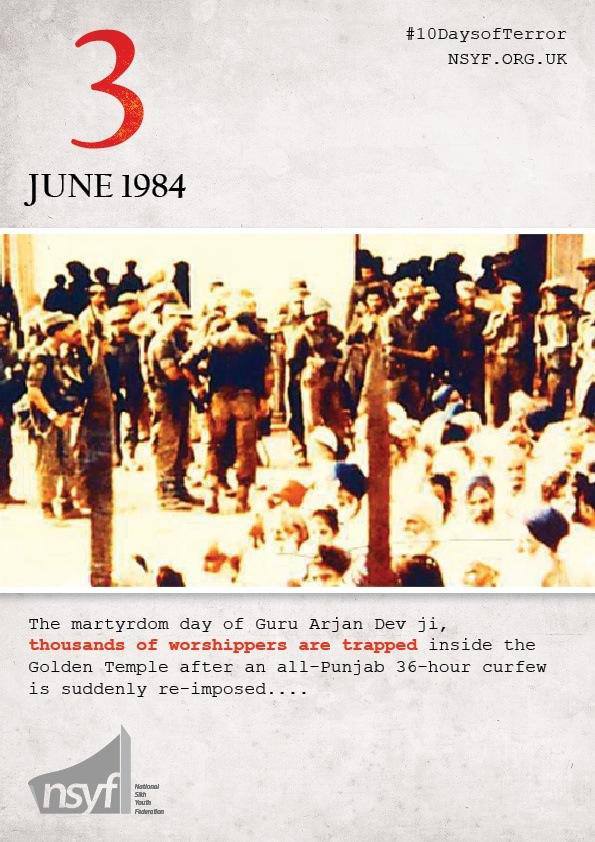 June 3, the martyrdom day of Guru Arjan Dev, and according to Gen Brar “as a result, during the entire day there was a steady flow of devotees to the Temple.” The traditional observances on this day conclude after 10 p.m. when the Guru Granth Sahib ji is ceremonially carried away (Sukhasan), and devout Sikhs typically attend this service. But at 9 p.m. an all-Punjab 36-hour curfew was suddenly re-imposed. Thousands of people were stuck inside the Temple. The Army operation commenced without warning or call for surrender:

(This report was made by an investigation team lead by Justice V. M. Tarkunde who was a prominent Indian lawyer, civil rights activist, and a distinguished judge. A day after publication of the report it was banned and confiscated, the authors were arrested and charged with “sedition” (incitement of rebellion against a government); http://www.pucl.org/admin/know_pucl.pdf).

In his memoirs (“Memoirs of Giani Zail Singh”, Har-Anand Publications, New Delhi, 1996) the President of India confirms that no warnings were given;

“I pointed out to her [Mrs Indira Gandhi] that military action was taken on a day when the Temple complex was full of pilgrims – men, women and children – assembled to observe the martyrdom of Guru Arjan Dev, most of whom perished in the cross firing… I told her that if notice had been given to these pilgrims over radio and television and loudspeakers, a majority of them would have come out… I had asked the government whether they had issued a warning on the loudspeakers to the people inside the complex to come out, to which they replied in the affirmative. Later, I came to know that no such warning had been issued and the operation had been suddenly launched.”

Subash Kirpekar one of the journalists, who met Bhindranwale on June 3 after the army had surrounded the Temple complex, asked him if he feared death. Bhindranwale replied, “One who fears death is not a Sikh.”

He further asked ‘is it your contention that Sikhs cannot live in India?’ The Sant replied, ‘Yes, they can neither live in nor with India. If treated as equals it may be possible. But frankly speaking I don’t think that is possible.

This shows that even up to the 3rd June Sant Bhindranwale only wanted for Sikhs to be treated as equal citizens, in stark contrast with the Indian Government’s allegations that he was a separatist leader.

2013-06-03
SSNews
Previous: Quebec Soccer Federation has no rational reason for banning turbans
Next: Statement by Official Opposition Leader Tom Mulcair on the 29th anniversary of the Golden Temple invasion