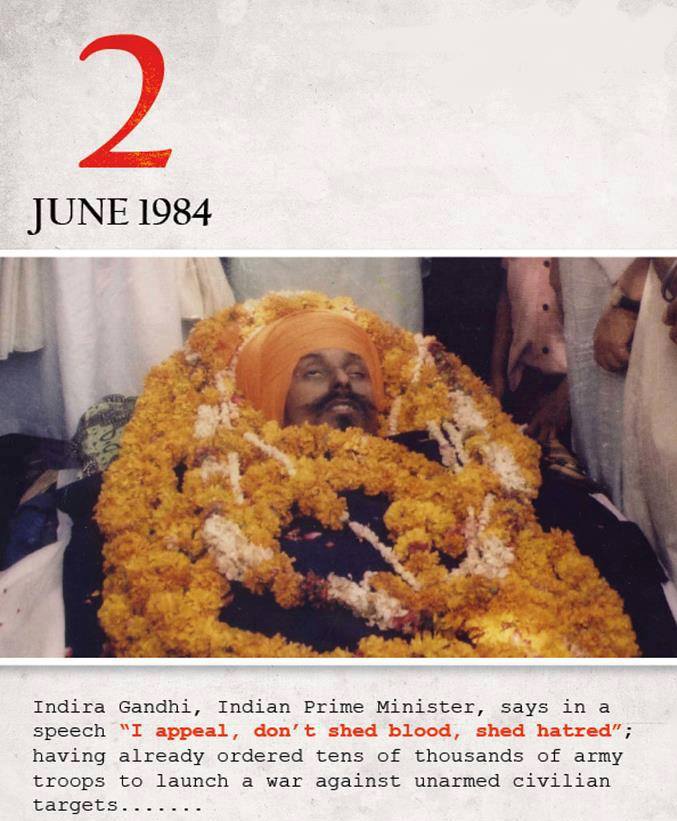 There was no restriction for pilgrims to enter Amritsar or even the Temple. But the exit doors out of Amritsar were being closed.

June 2, 1984 – Devinder Singh Duggal(In charge of the Sikh Reference Library) was relieved when “fortunately, on 2nd June a team of five reporters including Mark Tully of B.B.C. came there (Golden Temple) and were told the truth .

They were taken around the Golden Temple and shown 34 big wounds caused by the bullets on all sides of the Harmandir Sahib, some of them as big as almost 3″ in diameter.”

“The 2nd June passed off peacefully,” according to Duggal, because there was no firing and no curfew, while Baldev Kaur said it was ‘quiet’. A large number of Sikhs came to the Golden Temple from the surrounding areas along with their families as the next day, June 3, was Gurpurab or the martyrdom day of Shri Guru Arjan Dev Ji, the fifth holy Guru of the Sikhs.

The peace and quiet was only on the surface, because active preparations were a foot to break the peace.

Kanwaljit Singh and his friend Manjit Singh from Delhi visited Golden Temple on the morning of June 2 and found that there there was no restriction for pilgrims to enter Amritsar or even the Temple. But the exit doors out of Amritsar were being closed. After visiting the Temple, when Kanwaljit went at noon to the Amritsar Railway Station to catch a train for Delhi, they were told that the last train had already left and that the Flying Mail in the evening would not be leaving.

In fact they were told all outgoing trains had been cancelled. So Kanwaljit and Manjit were forced to return to the Golden Temple and put up in the Guru Ram Das Serai for the night. Thus was Kanwaljit to miss his interveiw at Delhi with the Institute of Bank Management on June 3 morning and his examination with the State Bank of India the same afternoon.

The photo above is of Bhai Mengha Singh Babbar, On June 1st 1984, Religious-biased Hindu government directed it’s evil eye towards the Sikh places of worship and Sackhkhand Sri Darbar Sahib, Amritsar. During this attack,
Bhai Kulwant Singh Babbar aka. Bhai Mehnga Singh of the organisation Babbar Khalsa had the honour of being the first martyr to die fighting those who would defile the sanctity of Sri Darbar Saahib [Link].

2013-06-02
SSNews
Previous: June 1st 1984 – 10 Days of Terror
Next: True character of the President of Seharjdhari Sikh Federation came out in public