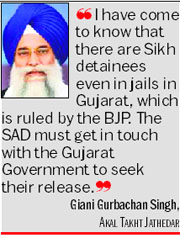 Amritsar, Punjab: Akal Takht Jathedar Giani Gurbachan Singh today said the Union Government, particularly Prime Minister Manmohan Singh, should wake up to the plight of Sikh detainees languishing in jails for years despite having completed their sentence and to ensure that they are released forthwith.

Talking to mediapersons here today, the Jathedar said he fully endorsed the demand raised by Gurbaksh Singh and the SGPC and the state government should make efforts to secure the release of Sikh detainees.

He alleged that the Union Government was resorting to double standards while dealing with minorities. “ I have come to know that there are Sikh detainees even in jails of Gujarat, which is ruled by the BJP. The SAD must get in touch with the Gujarat Government to seek their release,” he said.

The Jathedar also directed the SGPC to initiate the legal process for the release of the detainees at its own level. He appealed to Gurbaksh Singh to end fast and hand him over a list of detainees in various jails.

The Jathedar said it was a serious issue and would be discussed at the coming meeting of the Sikh high priests. He said Gurbaksh Singh should end his fast and channelise his energy into mobilising support for the cause. The Jathedar had sparked a row last week, holding that Gurbaksh Singh’s fast was against the tenets of Sikhism.