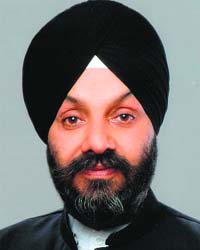 Comments Off on Italy says sensitive to Sikhs’ concerns 420 Views

New Delhi: Italy today reassured India that it was sensitive to the concerns of the Sikh community in the wake of a controversy after a Sikh delegation was held up at Rome airport and members asked to remove their turbans. This was conveyed by Italian Ambassador Daniele Mancini to Sudhir Vyas, Secretary (West) in the External Affairs Ministry, when he was called to the foreign office to impress upon Rome the sensitivity of the situation, official sources said.

After the Indian mission in Rome took up the matter, the Italian foreign office intervened with the Rome airport authorities and “facilitated the departure of the Sikh delegation without insisting on removing the turbans”. The delegation left for Dubai late Wednesday night through the VIP lounge, said the sources.

Mancini conveyed to the Indian official that there was a large Sikh population in Italy and that the authorities there “are sensitive to the concerns of the Sikh community on such matters”.

“He also mentioned that strict guidelines have been issued for officials to follow in such matters. He also assured that he would once again convey the sensitivity of the issue to the Italian authorities,” the sources said.

Talking to The Tribune on phone from Dubai, Manjit Singh said the episode would help in bringing more awareness about the Sikh sensitivities. “The people have now started speaking up. Ever since it happened to me I have come across various individuals who told me that their turban was also removed at one or the other airport abroad. However, they don’t take a stand as they either have business engagements or permanent residency issues.”

On how it felt getting such a treatment despite being the DSGMC chief, he said, “The only thought came to my mind at that time was that if this could happen to me what the common Sikhs would have been going through at these airports.” Interestingly, Manjit wasn’t asked for turban frisking when he landed in Italy or later when he boarded a flight from Milan to Rome. When asked whether he was targeted at Rome, he simply said “it may have been a mischief”.

Narrating the turn of events, GK said, “I along with four other members of the DSGMC team reached the airport on Tuesday night to board a plan to Dubai scheduled for 1.20 am (Italy time). We collected our boarding passes and proceeded for security check where we passed through metal detector. They asked us to take off our belts and shoes, which we did. Later, they told us that ‘you will have to remove your hat’. We told them it is not a hat but a turban and we can’t take it off.”

However, the airport official remained adamant, saying it was a procedure and they could not allow them to board the flight without this. He said he told the official that they can touch the turban and use a metal detector on it.

He said they wanted to remove turbans of all five of them. “We told them that our visas specifically mentioned that we’re here for a turban awareness event, but still this is how we’re being treated,” he said.

Incidentally, Manjit had called up Indian Ambassador Basant Kumar Gupta the same day. He contacted the embassy and spoke to First Secretary, Amit Verma, who got in touch with the Ministry of External Affairs.

In the meantime, the DSGMC members in Delhi also took up the matter with the Italian embassy. After missing the scheduled flight, they wished to take the next flight at 3.30 pm (Italy time), but were told that it will take time to resolve the issue.

He said he finally got a call at 6 pm, informing him that the matter has been resolved.

GK was all praise for the overwhelming support that he received from the Sikhs in Europe and other countries.