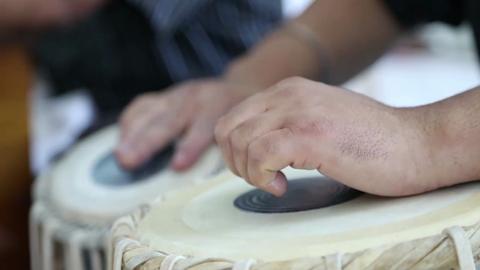 Johnston, US: J.J. Kapur’s head jerks back and forth as his grandfather precisely wraps a 6-foot-long saffron-colored cloth around his head.

The wiry 13-year-old stands proudly under a bright blue tapestry hanging from the ceiling of the Sikh temple in Johnston.

His grandfather, with the help of another temple elder, puts the finishing touches on the teenager’s first turban.

Kapur cracks a toothy smile. Today he is a man.

Kapur was one of five Des Moines-area boys to participate in a turban-tying ceremony Sunday at the temple. The ceremony, called dastar bandi, is a rite of passage for Sikh boys between the ages of 11 and 17. The boys have learned to tie their own turbans and will now be considered men in their family.

“I like to think of it as the equivalent of a bar mitzvah in the Jewish faith,” said Kapur, an eighth-grader-to-be at Stilwell Junior High in West Des Moines.

The passage into manhood in the Sikh faith is no small commitment. Men must wear a turban any time they leave home and can never cut their hair or beards — and that’s not to mention the extra chores around the house.

Kapur’s father, Gurwinder Singh, has a beard that reaches his belt buckle; he keeps it tied up under his chin. Kapur can boast little more than peach fuzz now, but said he plans to adhere to the Sikh traditions.

Sunday marked the first turban tying at the temple, which opened in April.

More than ever, it is difficult to get boys interested in dastar bandi, Singh said. Committing to wearing a turban and growing hair and a beard for life is not easy, especially in America, he said.

While Sikhs have always stood out to some degree here, the Sept. 11 attacks made practicing their religion more difficult, Singh said. Many people conflate Islam with Sikhism, though the two religions are not related.

Sandeep Dhingra, 17, who was also given his first turban Sunday, said he was bullied in middle school for wearing a head wrap until Singh gave a presentation at the school about how to tie a turban. Nowadays, he said, most of his classmates at Johnston High School are familiar with Sikhism.

A 600-year-old monotheistic faith founded in the Punjab region of Indian, Sikhism is the world’s fifth-largest religion. Sikhs follow the teachings of gurus and believe in holistic life experiences and equality between men and women, Singh said.

For many Americans, Sikhism is still synonymous with a massacre last August in which six worshipers at Wisconsin Sikh temple were gunned down by a white supremacist.

There are about 70 Sikh families in the Des Moines area between the temple in Johnston and one in West Des Moines, Singh said.

Some Johnston residents complained when construction of the temple stalled, but neighbors have otherwise been welcoming, he said.

About 100 people sat cross-legged on the floor watching Sunday’s ceremony. Midday light poured in the picture windows, lighting up the all-white interior of the temple. Members sang to the tune of a harmonium, an instrument similar to an accordion played on the ground. The five boys prepared to live out their commitments.

“This ceremony is a dominant milestone, and it’s hard to live up to,” Kapur said. “It’s a challenge, but I like a challenge.”