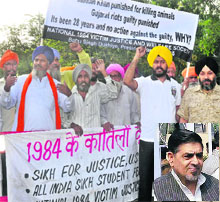 New Delhi, India: A Delhi court on Wednesday set aside the Central Bureau of Investigation’s (CBI) closure report giving a clean chit to Congress leader Jagdish Tytler in the 1984 anti-Sikh riots case and directed the investigating agency to reopen the case.

Additional Sessions Judge Anuradha Shukla Bhardwaj at the Karkardooma court rejected the closure report submitted by the CBI and ordered it to reinvestigate the case by recording the statements of victims whose statements were not recorded earlier. She issued the order on a plea filed by riot victim Lakhwinder Kaur, who is seeking further probe by the CBI in the killing of her husband Badal Singh, Thakur Singh and Gurcharan Singh near Gurdwara Pul Bangash in Central Delhi on November 1, 1984 in the violence following the assassination of Prime Minister Indira Gandhi.

Tytler is accused of instigating a mob that led to the killing of the three men who had taken shelter in the gurdwara, a charge strongly refuted by him.

The court asked the CBI to record statements of three crucial witnesses — Chanchal Singh, Resham Singh and Alam Singh — whose testimonies seek to prove Tytler wrong by putting him at the centre of the area where the riots were happening. Tytler claimed he was at Teen Murti Bhawan where assassinated Prime Minister Indira Gandhi’s body was lying in state.

Tytler was given a clean chit by the agency in 2009 when it had filed a closure report after re-investigating the case on court orders. The court had on April 4 reserved its order on whether to direct further investigation into a case related to Tytler’s role in the case. The CBI closure report had stated that Tytler was not present near the gurdwara on November 1, but was at Teen Murti Bhawan.

The CBI prosecutor Sanjay Kumar had argued the witnesses were “planted and tainted”. “The names of Resham Singh, Chanchal Singh and Alam Singh never came up in the statements of any of the witnesses till 2008. Their names were inserted in Surinder’s statement later on to create false evidence against Tytler,” Kumar had said.

Surinder Singh is an eyewitness in the case. Senior advocate HS Phoolka, who is defending Lakhwinder Kaur, had countered the CBI’s submissions saying there was material evidence that had been ignored by the court and the agency. “The CBI had time to examine Tytler’s driver, who had deposed in his favour, but they had no time to record the statement of the witnesses who had seen Tytler at the spot.