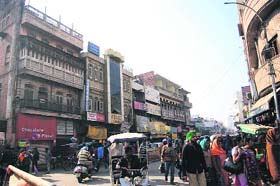 Amritsar, Punjab: Scores of illegal hospitality units which have cropped up around the Golden Temple in the recent past have become an eyesore to the hoteliers in the organised sector in and around the Civil Lines area here.

They resent that due to a lackadaisical attitude of the civic authorities these units not only hurt their businesses but also burnt a huge hole in the state exchequer.

Majority of these hotels, inns and guest houses located in the narrow lanes of walled city are not to be found in records and hence evade paying taxes.

A hotelier said the tariffs of a non-star guest house or lodge was almost the same as that of a star hotel located in a posh locality. A star hotel’s occupancy remains below 30 per cent whereas the unregistered hospitality units are doing brisk business, besides having no liability of paying taxes.

Most of these units are located near the Golden Temple which helps generate more clientele for them.

It has been learnt the owners of these units bribe MC officials to escape getting the mandatory no-objection certificate (NOC) from fire brigade and building department besides getting environment clearance from the Punjab Pollution Control Board.

Many of these hotels have been raised to the level of six storeys on 50-60 square yards residential plots and do not have the requisite NOC.

With no alternative fire exit route, these units have narrow stairs only, leading to upper floors.

This also poses as a threat to the lives of the visitors.

Hemant Batra, Senior Town Planner, said, “A recent survey conducted by the MC revealed that there were 131 such hotels, inns and guest houses which barely comply with the stipulated norms.”

It has also been learnt that this figure could be even more as the MC is in the process of conducting another door-to-door survey to identify the exact number after getting a rap from the Punjab and Haryana High Court in this regard.

Several hoteliers here complain that they are forced to let one room for Rs 2,000 per day, which otherwise commands tariff between Rs 4,900-Rs 5,500.

“We are compelled to let rooms on lower rates while we ought to pay all kind of taxes unlike these (illegal) hospitality units. We comply with all legal norms like scrutinising the antecedents of occupants, maintaining a property log account, paying food and beverages’ licence fee etc,” said a hotelier.

APS Chatha, president, Amritsar Hotels and Restaurant Association (AHARA), Civil Lines, said, “Many hoteliers in the organised sector will be forced to commit suicide as their debt burden has been mounting over the years. I know some hoteliers who were struggling to pay electricity bills, what to talk of profit.”

“An ever escalating tax regime imposed on us has added to our miseries. We appeal to the government to either relieve us from the burden of taxes or organise the hospitality units here,” he said.