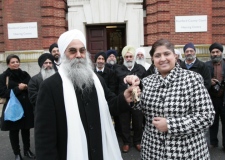 UK: Ilford courtrooms that were once used to settle family disputes and civil matters are set to become a community centre linked to a Sikh gurdwara following a seven-figure deal.

Representatives from the Guru Nanak Satsang Karamsar gurdwara in High Road, Ilford were handed the keys to Ilford County Court in Buckingham Road this lunchtime. They have ambitious plans for the 8,000 sq ft building, which housed two courts, including a nursery, advice surgeries and space for Punjabi language lessons.

Harmander Singh, whose father helped found the gurdwara, said: “Sikhism believes in justice and fairness for all.

“It’s so relevant that we’re buying a county court building.”

Amrit Panesar, from Her Majesty’s Courts and Tribunal Service, handed the keys to head priest Sant Partrap Singh before worshippers held prayers in the court’s hallway.

It closed on December 31 and had operated as an annex of Romford County Court since April.

One of the courts could be used to hosts breakfasts for weddings at the gurdwara, but Mr Singh said it wouldn’t be used for receptions.

He said space could also be shared with Redbridge Council and police safer neighbourhood teams.

The building is locally listed so alterations to its façade are not planned.