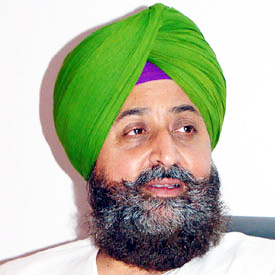 I will take a train to Golden Temple

Amritsar, Punjab: Partap Singh Bajwa, Member of Parliament from Gurdaspur, has been named as the next chief of the Punjab Pradesh Congress Committee. Faced with a challenge of leading the party that has seen three back-to-back defeats in Punjab, Bajwa, speaks to Priya Yadav, about what the change of guard will mean.

Q. What is going to be the message for the people with a new man in charge of Punjab Congress?

A. Congress is a party of the common man and we are going to connect to the aam aadmi. I am going to THE Golden Temple on March 16 and would be taking the train for that, just like common man does. Once there, I will walk from the railway station to the Golden Temple with my supporters. No chopper rides for me. The idea is to send the message that we are aware of what concerns the man in the street and have solutions for that. Also that we are not just accessible, but very easily so.

Q. Are you going to focus on party affairs now that you are the PPCC chief, or will you contest the Parliamentary elections?

A. I am keen to contest the parliamentary elections and I think I can manage both being an MP and managing the party affairs. It would definitely be a tough task co-ordinating both the roles. But it is up to Rahul Gandhi and Sonia Gandhi to take a call on this. I will honor their decision.

Q. What does this change of guard in Congress mean for the politics in the state?

A. This change is significant as it is more of a generational change. Earlier, both Congress and Shiromani Akali Dal were being led by leaders above 70 years of age and with majority of the voting population in the younger age group, there was difficulty in relating to them. Now, even SAD is being led by a younger president, who is in his fifties, like me. As such, there is more concern for the youth and their problems.

Q. What are the major issues in Punjab that you would be highlighting?

A. The false promises made by Shiromani Akali Dal and their failure in honoring the election manifesto. The law and order situation is so miserable that in Delhi the perception is that Punjab is worse than Bihar. Also, the miserable situation of state finances is a major concern as people are going without salaries. The loot of the state by the Badal family, which has turned the government into a private limited company and are controlling the sand, gravel, transport, cable network businesses, besides running the entire liquor trade.