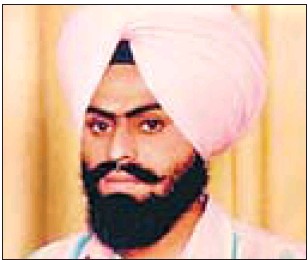 I was merely sympathiser of Sikh movement, wrote Bhullar

Comments Off on I was merely sympathiser of Sikh movement, wrote Bhullar 341 Views

New Delhi: In his own words, death row convict Devinderpal Singh Bhullar was merely “a sympathiser of Sikh movement”, but the Punjab Police allegedly killed his father and uncle in custody to settle scores with him.

This is mentioned in Bhullar’s five-page handwritten letter, which he wrote in 2005 following the rejection of all his appeals by the Supreme Court.

The letter, which reveals Bhullar’s mind, has now been released by his lawyers and sympathisers.

“Sikh youths were fighting against the genocide of their community engineered by the government. The Punjab Police killed my father and uncle in 1991 just because I became a sympathiser of these so-called militants,” Bhullar said in the letter addressed to the German chancellor.

Bhullar, who has been on death row since 2002 and whose mercy petition was rejected by then President Pratibha Patil in May 2011, stated that he became a sympathiser of militants due to his injured Sikh psyche and the 1984 Sikh genocide.

He termed the militants as “victims of circumstances” following Operation Bluestar in June 1984 and the Sikh genocide a few months later after the assassination of then Prime Minister Indira Gandhi.

Bhullar, who was named as the main accused in the 1993 Delhi bomb blast case, stated that “thousands of Sikhs were killed in the nationwide riots of 1984 and young women raped in front of their families as part of state terrorism” unleashed on his community.
Referring to his own case, Bhullar wrote that he managed to reach Germany on a fake passport in the name of Surjeet Singh Sandhu in December 1994, where he was put in the immigration jail for a month and “wrongly deported” to India.

Despite his conviction by a special court, which was upheld by the Supreme Court in a split verdict, Bhullar wrote that he had no role in the 1993 blast.

A Patiala resident has sent a petition to the Supreme Court, seeking a stay on Devinderpal Singh Bhullar’s execution so as to enable a larger bench to consider the legal issues involved in the case.

In a petition addressed to the Chief Justice of India (CJI) Altamas Kabir, Tarsem Singh Khatkar (73) said the apex court bench that rejected Bhullar’s petition could not have entertained the matter as a “substantial question of law” was to be interpreted and the “same can be done by a five-judge bench only”.

Citing Article 145 (3) of the Constitution, he requested the CJI to reopen Bhullar’s case by referring it to a constitutional bench.

In a related development, the National Human Rights Commission (NHRC) on Wednesday “strongly” recommended to the union government to allow Bhullar’s close relatives to meet him. The NHRC recommendation came after a delegation and Bhullar’s wife Navneet Kaur met commission chairperson justice KG Balakrishnan (retd) and other members regarding the execution.

“The commission has strongly recommended that close relatives of the prisoner be given an opportunity to meet him,” the NHRC said. On April 7, the CJI had said that the family of Afzal Guru — the 2001 Parliament attack convict who was executed on February 9 — should have been informed about his hanging before it took place.