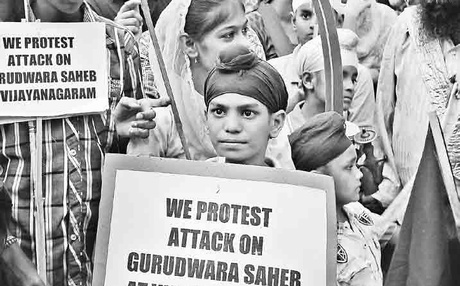 Hyderabad, India: Protesting against the attack on a Sikh Gurudwara in Vizianagaram on Saturday and sacrilege of the sacred scripture of Sikhs besides attacking a Sikh priest by antisocial elements, Sikhs  staged a protest demonstration at Gurudwara Saheb Ameerpet in Hyderabad on Sunday.

Sikhs, holding placards and black flags, gathered in large numbers at the Ameerpet Gurudwara and demanded the arrest of the  attackers and stringent action against them.

President of Gurudwara Saheb Ameerpet S Darshan Singh said anti-social elements threw stones on the Gurdwara Saheb in Vizianagaram and a few of them even barged into the shrine and abused the priest there in a filthy language.

“Attacking a religious place which has nothing to do with the ongoing agitation is very unfortunate,” he said.

Tagged with: Sikhs in India 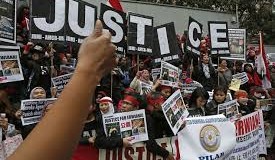 Walk for Justice on February 10