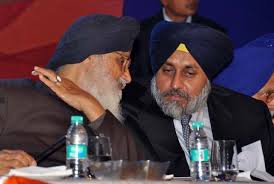 Comments Off on Human Rights Violation: US Sikh Group To Serve Badal Summons In India 426 Views

New York, USA: The New York based “Sikhs for Justice” (SFJ) had earlier offered $20,000 to anyone who could successfully serve the summons to Badal, who was expected to visit Milwaukee, Wisconsin, for a wedding on July 5.

The group on Monday said it has retained the services of “Process Forwarding International” (PFI), a Washington based company to serve the summons on Badal in India.

A Milwaukee court had thrown out a lawsuit against Badal in May over conflicting reports about whether the person served with court papers was actually Badal.

The federal court for the Eastern District of Wisconsin has given SFJ until October 24 to serve the summons on Badal in a human rights violation lawsuit.

SFJ and Shiromani Akali Dal (Amritsar), headed by Simranjit Singh Mann, have filed the human rights case against Badal and his son Sukhbir Singh Badal, the state’s deputy chief minister, accusing them of overseeing and condoning the detention and torture of political prisoners.

The complaint alleges that the Badals throughout their tenure “have actively shielded, protected and promoted the police who were or have been involved in gross human rights violations, extra judicial killings and torture”.

The Hague Service is a treaty signed by both India and United States which allows service of judicial papers between the signatory countries without diplomatic involvement, he said.

Under Article 15 of the Hague Service Convention, service is considered complete once copy of summons and complaint is delivered to the central authority of India which is responsible to receive judicial documents from foreign courts, Pannun said.

The lawsuit against Badal has been filed under Alien Tort Claims Act (ATCA) and The Torture Victim Protection Act (TVPA) alleging that the defendants authorized, commanded, or directed the unlawful acts of the security forces operating under their command and authority.

Previous: Religious Hindu and Sikh immigrants, not Muslim, likelier to be obese
Next: New counters may end long queues for ‘parshad’ at Golden Temple