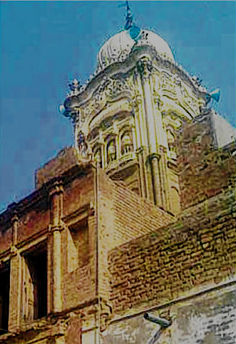 Historical Gurdwara to be Illegally Encroached in Pakistan

Lahore,  Pakistan: In yet another disappointing incident, a land mafia in Pakistani has sought for the illegal selling of land falling under the premises of a Gurdwara. The 2 story building of Gurdwara Singh Sabha in Sahiwal is expected to be bulldozed any time during the upcoming week. The Gurdwara is located in the commercial zone at a distance of 250 km from Sahiwal and it will be illegally sold to construct a plaza in its place.

A deal of 5 crore for the land has been made by the Former Counselor of PML-N Party Romana Safdar Gujari. Interestingly the party is supported by Retired Captain Mohammed Safdar who is the son in law of Pakistani PM Nawaz Sharif. With the recent winning of elections, the local Sikhs as well as press reporters are giving their full support to the PM’s party.

Talking to the press, Surinder Kochhar (historian) exposed around 15 colored photographs stating that all sort of illegal and prohibited activities are being performed in the Gurdwara building. He has appealed to the Punjab Government and SGPC to look into and solve the matter.

The selling of land is not only a complete violation of the law but also a disturbing event on the part of the Pakistani government to hurt the religious sentiments of Sikhs.