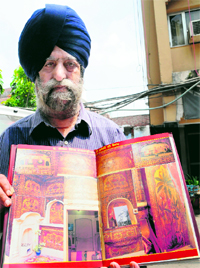 Amritsar, Punjab: With the successive governments caring little about preserving heritage buildings, a historic mansion of Sikh general Mangal Singh Ramgarhia, who was in Maharaja Ranjit Singh’s army, has been reportedly demolished by its new owner at Kucha Mangal Singh Ramgarhia area of the city.

Located near the Golden Temple Complex, the mansion was with the descendants of Ramgarhia for a considerable period of time after which they sold it off. Consequently, the property has now changed hands and its new owner probably intends to utilise the space to construct a new building.

Though it is being said the structure was damaged by the recent rains, leading to its collapse, some residents claimed it had been demolished. Its remains, however, still reflect the rich heritage as rare artwork could be seen on its walls.

Talking to The Tribune, Onkar Singh Sandhu, who has penned a book on the 500-year history of the Ramgarhia community, said he had urged the Tourism Department to take the responsibility of its preservation, besides bringing the matter to the notice of the Shiromani Gurgwara Parbandhak Committee. However, nothing was done to preserve it.

The mansion was constructed with Nanakshahi bricks somewhere between 1850 and 1860 while its walls adorned beautiful frescoes. The elderly living in the area said the structure was part of Sikh heritage and various prominent personalities had visited it. It was also witness to drafting of various strategies during the Maharaja Ranjit Singh era. Even the street was named after the noted Sikh general and people know it as ‘Kucha Mangal Singh Ramgarhia’.

Mangal Singh Ramgarhia was born in 1800 AD. He fought various wars under Maharaja Ranjit Singh, including the one with the Afghans in 1837. In 1839, he was entrusted the responsibility of looking after the forts in Peshawar and Kabul, which he discharged honestly. Maharaja Ranjit Singh even rewarded him with property. He passed away in 1879.