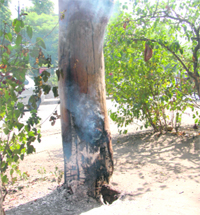 Amritsar, Punjab: Garbage collected from the streets being dumped and burnt at the garden With the Municipal Corporation (MC) workers continuing to burn the garbage at the historic Company Bagh, it is taking a toll on the flora and fauna inside the garden, besides causing inconvenience to residents who visit it for fresh air in the morning. Even trees have caught fire due to this practice by the MC staff.

Spread over 84 acres of land, the garden came into existence in 1818 as the summer palace of Maharaja Ranjit Singh. It is an irony that there are a number of rare trees in the Company Bagh, which normally grow in the Himalayas and Nilgiri Hills. These trees face an uncertain future due to the apathy of the Municipal Corporation. Some of these trees date back to two centuries. However, the precious flora of the garden is facing threat because the MC men burn the refuse beneath them.

Even as the Deputy CM Sukhbir Badal intends to transform Amritsar into a heritage-look city, the heritage sites of the city have turned into a garbage yard.

This issue has been brought into the notice of the authorities umpteen times, but in vain. It is irony that MC’s own sanitary staff was spotted burning the garbage piled in the corners of the Company Bagh. Ironically, the camp office of Mayor Bakshi Ram Arora is located on the Panorama located within the Bagh. The Mayor himself passes through the stretch daily to attend his pre-lunch session with the MC officials, but the dismal state of affair prevailing in the bagh could never catch his fancy.

Residents, who stroll here in the mornings and evenings, complained that they come in the bagh to breathe fresh air, but it has become otherway round. “The MC men routinely burn the garbage in the Bagh, little realising the damage they cause to the environment. We have questioned them many a time, but they do not listen to our pleas,” said a resident.

It has been noted that in the absence of any check on them, the sweepers in various localities too adopt the same practice.

Residents complained that it was a routine affair of the safai karamcharis who collect the refuse from the adjoining shops or whatever filth scattered on the roads and dump it in the Company Bagh.