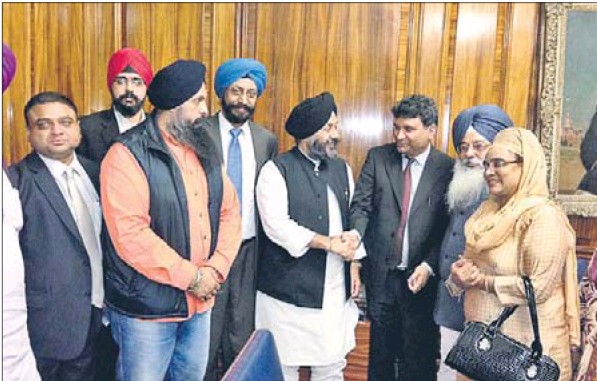 London, UK: The Indian high commission in United Kingdom has agreed in principal to the Delhi Sikh Gurudwara Management Committee (DSGMC)’s demand to allow group visas to the British Sikhs for pilgrimage to historical gurdwaras in India.

DSGMC president Manjit Singh GK put forth this proposal during his meeting on Friday with deputy high commissioner Virender Paul who promptly assured a positive response.

“It is a good idea and we will take it up with the Indian authorities in New Delhi if such an arrangement for group visas for Sikh pilgrimage could be worked out in consultation with DSGMC,” Paul said. This step, he added, would surely help in connecting the UK Sikhs with their own community back in India.

The DSGMC delegation, led by Manjit Singh GK, is currently visiting Britain to reach out to Sikh hardliners and to neutralize their entrenched antagonism towards the Shiromani Akali Dal that is ruling in Punjab and also controls both the Shiromani Gurdwara Parbandhak Committee ( SGPC) and DSGMC, the apex Sikh religious bodies in India.

Many British Sikhs whom DSGMC team met in last four days had voiced their grievance over denial of visas for pilgrimage to the gurdwaras in Punjab and Delhi.

Promising to follow up the visa issue with the Indian government in New Delhi, Manjit Singh GK said :“The DSGMC will facilitate the UK Sikh community to get group visas in Britain.” This will also provide an opportunity to a number of people from the old generation as well as from the new generation to go back to their roots and appreciate the places of worship in india, he added.

To a question whether the high commission would consider granting visas to the blacklisted Sikhs who, according to pro-radical Sikh Council of UK, have been deliberately denied visa by the Indian authorities, GK said this would surely help in bridging the gap and removing a lot of misconceptions about the Sikhs living in UK who had taken asylum due to various reasons but were unable to go back to their parent country for the last nearly 30 to 40 years.

GK said he would also take up the matter with SAD president-deputy chief minister Sukhbir Singh Badal to consider the cases of the Sikhs who are residing in Britain but are wanted in some criminal cases back in India. “They should be allowed to return to India to face the criminal proceedings as per the law, but denying them a visa because of their background is absolutely unjustified” he added

Minister (coordination) high commission of India, SS Sidhu, said the number of Punjaborigin British residents figuring in blacklist was probably not more than 40.