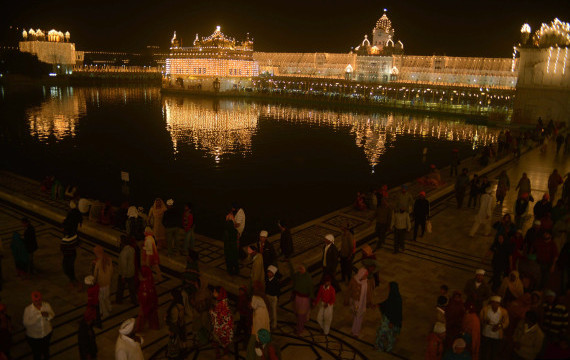 Amritsar, Punjab: Hi-tech lighting systems will replace the fancy or traditional lights for illuminating the Golden Temple complex during night.

Instead of the traditional lights, the hi-tech lights will now reflect the grandeur and glory of the gold-plated, dome-shaped sanctum sanctorum in the pool of nectar or ‘sarovar’ at night.These new systems are bound to have a spell-binding effect when one views the reflection of the entire complex in the marble flooring.

Keeping pace with the changing times, the Shiromani Gurdwara Parbandhak Committee (SGPC) has taken a decision to replace regular lighting with hi-tech illumination.

The project that was discussed a couple of days ago, aims at spending 30 crore and an international company is likely to be roped in for the project.

The SGPC, while introducing the hi-tech system, aims not only at further beautifying the shrine but also cutting down the electricity expenses. The heat generated from the traditional lights also has a damaging effect on the marble of the shrine. The mesh of wires all around the shrine can cause short-circuiting and these wires are often viewed as an eyesore.

Talking to Hindustan Times, deputy commissioner Ravi Bhagat said, “The project was discussed a few days ago during the visit of the deputy chief minister. Illumination is aimed at further beautifying the looks during night and also getting rid of electric wires. Electricity will also be saved.”

The DC said an international company was likely to be hired for the project and the whole plan would be funded by the SGPC.

SGPC additional secretary Daljit Singh Bedi confirmed the development saying it was expected to be taken up at the start of the next year.

The DC said, “After illumination in the entire Golden Temple complex is complete, one could see reflection of different sorts of lighting at various points of time.” He claimed that once the project was in place, one could see the shrine illuminated every night.

For years, the SGPC has been decorating the shrine with lights on special occasions and festivals.