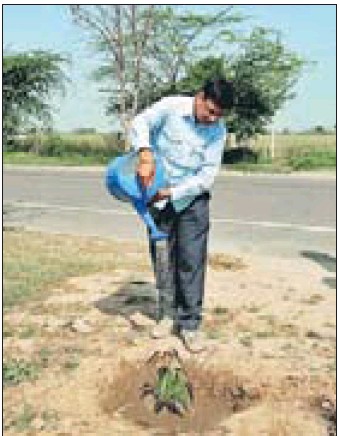 Heroes out to save Mother Earth

Comments Off on Heroes out to save Mother Earth 588 Views

Ludhiana, Punjab:  Those who care about the environment understand the urgency of a solution to its deterioration. They can hear the intensifying alarm over environmental damage, and can see the future that is dark and doomed. Greenhouse emissions are accelerating, the city is enveloped in a gray shroud, resources are fast depleting, and animals and birds are being elbowed out.

While the sheer scale of the challenge might leave many of us powerless, there are those who provide light in the darkness. They cannot solve problems single-handedly but have dedicated themselves to causes that others dismiss as hopeless.

This dedicated environmentalist has been working relentlessly for the past 15 years, and almost 5,000 trees planted by him stand as tall testimony that. A resident of Raikot with business in Sudhar, Shital has been instrumental in boosting the areas’ green cover. He transforms garbage-dumping grounds into green hubs, and, in doing so, spends heavily from his own pocket – to the tune of several lakhs.

He began with planting saplings near the Sudhar canal that are now full-grown trees, and moved on to plant 1,500 saplings in Raikot and several other areas. For the coming plantation season, he has earmarked buildings and areas to plant 2,500 saplings. “I feel for the environment, I feel for mankind. I do my best, but if everybody chips in, change won’t be far,” he said.

This non-government organisation is trying to bring changes in Sikh religious ceremonies and rituals to conserve the environment. The Ludhiana chapter of this Washington-based organisation has been actively working with gurdwaras and has been successful in making Gurdwara Flower Dale Colony switch from Styrofoam and plastics to steel plates for community lunches.

“We were surprised to learn that every major gathering at this gurdwara required newly bought Styrofoam cutlery, nearly 240 plates and spoons, which would be disposed of at the end of the meeting. Through our efforts, they have done away with Styrofoam, which is harmful to environment,” says Ranveet Singh, Ludhiana resident and India’s EcoSikh project manager.

Besides, the organisation regularly carries out cleanliness drives in public places.

Dr Amandeep Bains, a dentist by profession, has almost taken it as a mission to clean the banks of river Sutlej that is constantly reeling under the reckless behavior of residents, who throw kilos of polythene bags into the water daily.

As president of an organisation named RBS (Rajguru, Bhagat Singh and Sukhdev) Roots, Dr Bains, along with several members, have carried out several awareness workshops and cleanliness drives in the river, in which members enthusiastically collect polythene bags manually.

“Once, we collected 300 kilos of bags in a day,” Dr Bains shared. Every now and then, the group sensitises people to avoid throwing the plastic bag while dumping “puja samagri” into the water.

For the past 20 years, Vipan Bhatia has been dedicatedly rescuing our feathered friends that are falling prey to the fast urbanisation and climate change.
So far, this cloth businessman has rescued over 3,000 birds in Ludhiana, a city that has left little space for these winged creatures to survive.

Vipan, who formed a nongovernment organisation, five years ago named Pakshi Seva Samiti, has dedicated three rooms in his own residence to house the birds in peril. In this sultry heat, around 50 birds, injured, weak or ill, have taken shelter in his house. These include the ones Vipan found fallen on the roads or those that people brought to him. 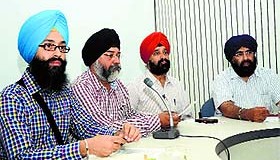 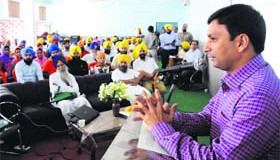 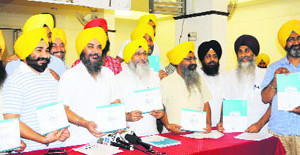