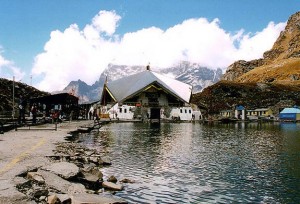 Chandigarh: After the June 16 cloudburst, the Hemkunt Sahib shrine at a height of 15,200 feet in Chamoli district of Uttrakhand has been shut for the current season. The Hemkunt trust managing gurdwara at Hemkunt took the decision on Friday.

A trust member told HT over the phone that the scale of damage of the way to the shrine is so severe that it may not be possible for the shrine to open even in the next season. It is for the first time in 50 years that the shine was shut in between the season since 1960s when the pilgrims started visiting the shrine every year.

The shrine is opened for pilgrims every year for four months from June 1 to October 5. The Hemkunt shrine has not suffered any damage but Gurdwara Gobind Ghat on way to Hemkunt Sahib has suffered severe damage and needs re-construction.

“Birs of Guru Granth Sahib would be brought down and a few sewadars and other staff members would also come back soon,” treasurer of Hemkunt Sahib trust Madan Mohan Singh Chawla told HT, adding that there were no pilgrims in the Hemkunt Sahib Gurdwara.

Gobind Ghat gurdwara, 23-km downstream, has been devastated after the Alaknanda river caused damage to the gurdwara. Serais, parking lots, main bridge and roads leading to Gobind Ghat gurdwara were damaged. The local authorities were yet to start the work to reconstruct and repair the damages. “At present, the priority is to evacuate stranded pilgrims, then to recover bodies and then clear debris and start re-construction,” said the trust member.

Chawla said that after the recent cloudburst, the Alaknanda was flowing through the gurdwara structure, and the three-storey storeroom where ration and grocery was stored to feed the pilgrims for the entire season is full of silt and debris. The stored ration is no more fit for human consumption. The serais have developed cracks and have to be rebuilt.

He said the exact assessment of the damage caused by the devastation was still to be made, but apart from loss of human life, loss to property is to the tune of hundreds of crores of rupees.

A parking lot which caved in on June 16 night, 72 cars and about 150 two-wheelers were swept away. “How many people were sleeping in those cars can’t be known,” said Chawla. He said that after the news of the cloudburst came, pilgrims sleeping in the serais adjacent to the river were evacuated. A helipad at Gobind Ghat was also damaged due to which no take-off or landing was possible.

There are around 2,800 pilgrims still stranded at Gobind Dham, 5 km downstream of the Hemkunt shrine. Eighteen kilometre downstream of Gobind Dham is Gobind Ghat. Pilgrims walk 23 km from Gobind Ghat via Gobind Dham to reach Hemkunt Sahib. A major portion of the pedestrian path has also caved in as the Alaknada flows along the trek. 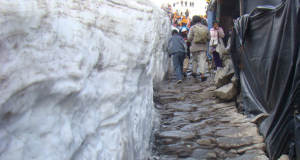