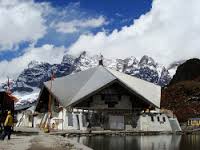 Comments Off on Hemkund Sahib opens for year 2013 75 Views

Uttarakhand, India: Sikh pilgrims takes a holy dip in the glacial lake at Hemkunt Sahib, as the Sikh shrine surrounded by snowclad Himalayan peaks in Uttarakhand’s Chamoli district, reopened on Saturday after an eight-month winter break.

Thousands of pilgrims, including Uttarakhand Minority Commission chairman NS Bindra, took a ishnaan in the lake before paying obeisance at the gurdwara.

Situated at an altitude of 15,500 feet above the sea level surrounded by seven mountain peaks, Hemkunt Sahib can be reached only after a 20-kilometre trek.

The arduous trek begins from Gobindghat on the Rishikesh-Badrinath highway, and is a test of both character and faith.

Devoted to Guru Gobind Singh, the shrine finds mention in Dasam Granth, a piece of work believed to have been narrated by the tenth Sikh Guru, and is closed for eight months in October because of snow-bound conditions.