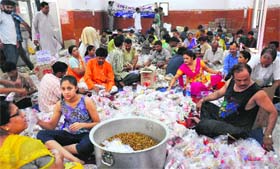 Help pours in for victims

Comments Off on Help pours in for victims 95 Views

Chandigarh: In the hour of extreme crisis in the flood-ravaged Uttarakhand, volunteers in Chandigarh have begun a massive exercise to collect food items and other relief materials for the flood victims and local survivors, who are stranded in big numbers in many areas of the hill state.

Several welfare associations today held donation camps across the city to motivate people to come forward and donate food items like biscuits, warm cloths and other relief materials, which will soon be despatched to the flood-hit areas.

Bachan Singh, president of the Chandigarh Kumaon Sabha, said their camp at the Sector 32 main market got a tremendous response. Several people came forward to donate different items for the flood victims. While this camp would remain open for the next one week, two other camps would begin tomorrow in the markets of Sector 37 and 45.

“Two of our trucks will be despatched after Monday and will hand over the relief material to the Army in Srinagar (in Uttarakhand), the area which has witnessed a massive destruction,” he said

The Shiv Parwati Seva Dal, which held a camp at the Satsang Bhavan in Sector 26, has collaborated with the ITBP in Dehradun and despatched relief materials, including medicines, packaged water and food to Uttarakhand. President of the body Rajinder Singh Samant said our camp would remain open till the time they get donations from the local people.

“The situation in Uttarakhand is grim. We are just trying our bit to help the survivors there,” he said.

Already running their camps at several places in Chandigarh and Panchkula, the city-based Garhwal Sabha yesterday despatched 5,000 packets of food to Rudraprayag in Uttarakhand and another 10,000 packets are ready to be dispatched tomorrow morning. These will be handed over to the Army.

A member of the Garhwal Sabha, BS Bisht, said people were really coming forward in this hour of crisis and donating blankets, medicines and even cash at their camps being held at the Gharwal Bhawan in Sector 29 and several other places. “We will continue our camps till the end of this month and try to mobilise maximum help for the survivors,” he said

The Resident Welfare Association of Sector 10, Panchkula, will hold a day-long camp tomorrow in the Sector 10 market.

These associations have requested the community at large to come forward for the flood victims’ assistance.