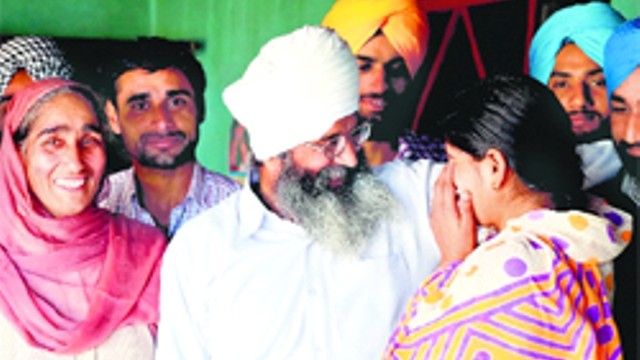 Had lost hope to reunite with family: Released detainee

Comments Off on Had lost hope to reunite with family: Released detainee 606 Views

While Shera greeted everyone with warm wishes, his daughter Sarabjeet Kaur and wife Baljinder Kaur were trying to hide their tears and joy, assuring themselves that he was finally among them even if for few days. Speaking to The Tribune, Shamsher Singh said he had no words to thank Gurbaksh Singh Khalsa who took up their cause. He said it felt great to meet his family after 18 years without any police presence.

He said he had applied for parole twice earlier, but his request was turned down. “When my daughter Amandeep Kaur got married in 2009, I was allowed to come for two days, but only during daytime. But, people were not willing to talk to me since I was always accompanied by heavy security and they did not want to get into any controversy,” he said.

In a heavy voice, Shera said: “I had lost all hope of freedom and reunion with my family. I am thankful to the Punjab Government and Akal Takht Jathedar Giani Gurbachan Singh for giving us a chance to spend sometime with our family,” he added.