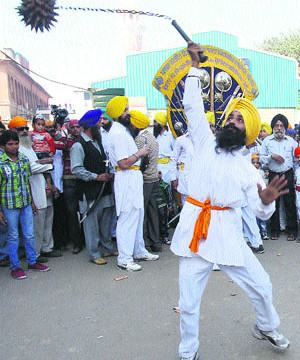 The nagar kirtan, organised by the KCGC, started from the Khalsa College campus and culminated at the Sri Akal Takht Sahib in the Golden Temple complex.

The KCGC staff, including honorary secretary Rajinder Mohan Singh Chhina, led the devotees who passed through GT Road, Khalsa College for Women entry gate, Putlighar, Bhandari bridge, Hall bazar and finally reached the Harmandar Sahib. Chhina said as per the tradition set in 1912, they had been annually taking out nagar kirtans. He thanked people and representatives of organisations who accorded a warm welcome to the procession on the way to the Harmandar Sahib. Gatka and other martial art forms performed by youngsters during the procession was the major attraction.