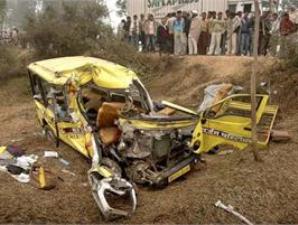 Jalandhar,Punjab: The death of 13 school children in a road accident near Nakodar on March 4 has prompted the clergy to hold religious functions in their memory and generate public awareness on the condition and driving of school buses.

Takht Damdama Sahib jathedar Balwant Singh Nandgarh organized an akhand path (uninterrupted recitation) of Guru Granth Sahiband the bhog function was held at the Takht on Saturday. The jathedar asked the transport department and other authorities to deal with a firm hand where driving of school buses and check on them is concerned. “It is a great loss for the parents of children (who died in the accident) and we empathize with them. But we should learn our lessons, so that such tragedies do not happen again,” jathedar Nandgarh told the gathering.

In Mandi Kalan village, which is around 6km from Rampura Phool, not only is an akhand path being organized by villagers but a blood donation camp will also be held on Tuesday. “The accident was so moving and painful, that we could not help but feel a collective loss. I discussed the idea with some friends and we decided to hold the akhand path in the memory of the children,” said Sukhdip Singh, resident of Mandi Kalan village. “We also met two school owners after the accident, to ask them about the condition of their buses,” he added.

“We have got the photographs of 10 children (who died in the accident on March 4), which are being enlarged for the function,” said Dharamvir Singh and Major Singh of the village. “The panchayat has also joined us and even the village gurdwara committee is supporting. We have already got names of 50 blood donors who wanted to pay tribute to the young victims by donating blood,” said Harinder Singh and other villager.

Mandi Kalan resident Pritpal Singh said that now people in the village and other places have started accosting the drivers of buses and telling them to heed to speed limits.

An akhand path is also being organized at gurdwara Tahli Sahib in Baler Khan Pur village in Kapurthala district by Sant Daya Singh., who had also performed an ardaas in the memory of Delhi rape victim Nirbhaya.

Sant Leader Singh of Saiflabad village also performed an ardaas in the memory of the children at his dera.

Gurdwara management in Partap Nagar, Jalandhar, is also organizing an akhand path in the memory of the departed souls.

Previous: I will take a train to Golden Temple
Next: Kashmiri Sikh duo highlights HR violations