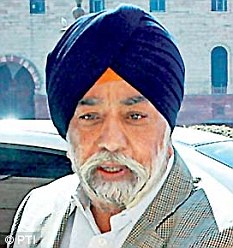 Comments Off on Gurdwara panel polls: SAD ropes in BJP for canvassing 463 Views

SAD president Sukhbir Singh Badal on Saturday released the party manifesto, promising a council for free legal aid to victims of the 1984 anti-Sikh riots, and also for Sikh refugees uprooted from Pakistan and Afghanistan in the 1990s.

In the last DSGMC polls held seven years ago, Sarna’s SAD-Delhi had 28 seats. The Badal-led SAD had won 12 of the total 46 seats that are up for grabs, while a third front led by Manjit Singh GK had got six and later joined the Badals. Manjit is now president of the SAD-Badal’s Delhi unit.

Sukhbir, while releasing the manifesto, gave a call to the Sikh community of Delhi to “stand against the Congress that is supporting the Sarnas”. The upcoming scheduled campaigning by Punjab Congress chief Capt Amarinder Singh for the SAD-Delhi, he said, was evidence that Sarna’s Akali Dal was “of the Congress”.

To counter the Congress support to Sarna, the Badals have roped in the local BJP leadership. “We all remember the bond between (Parkash Singh) Badal sahib and (former PM) Atal Behari Vajpayee that ensured Hindu-Sikh unity, while the Congress had committed the massacre of Sikhs in 1984,” local BJP MLA Subhash Sachdeva said.