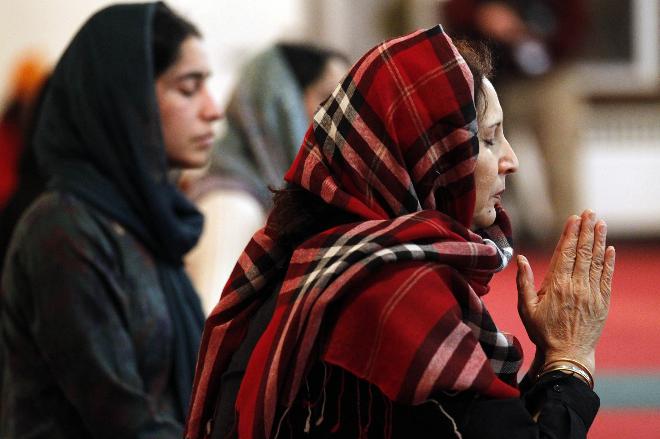 Comments Off on Gun violence must end 413 Views

Dee Walia of Brookfield prays during a community vigil last month to honor the victims of the Newtown, Conn., school shooting. The vigil was sponsored by the Sikh religious community at the Sikh Religious Society of Wisconsin in Brookfield.

Brookfield,Wisconsin,USA: After the Sikh Temple of Wisconsin mass shooting on Aug. 5, we collectively grieved as Americans. Since that time, many other gun-related tragedies have occurred. The most recent, the horrible events at Sandy Hook Elementary School in Newtown, Conn. These events have become all too common.

After these massacres, we all get together; we hold candles, hug and sing and utter soothing words to each other and go home. We wake up to new and bigger tragedies and repeat the cycle.

As a physician, I am accustomed to listening to the pains of my patients that ravages of life bring them. I empathize with them, guide them and allow them to heal. As a Sikh American physician, I found the tables were turned when patients came into my office offering their condolences and kind words.

Some gave hugs, and we cried together. Some said that they were ashamed of what had happened. Discussions invariably turned to the problems our society faces and the potential solutions. The subjects ranged from psychiatric illnesses, proper parenting, drugs, guns and the Second Amendment. One patient relayed the story of her blind friend, who applied for a gun and was able to purchase one with ease. The fact that this was possible shows how flawed the system is for obtaining weapons.

The problem of gun violence has always been in the periphery of my life, but, recently, it has come to the forefront. I am appalled at the statistics of deaths in this country by gun violence.

Over 30,000 people are killed each year by guns. We only hear about such deaths when there is a mass shooting. Five hundred children die each year from gun violence – 25 times the number that died in Newtown.

Since 1933, there have been 1.4 million American causalities by guns. This number is higher than the casualty count in all American wars combined. Soldiers fighting the wars in the Middle East are safer there than the citizens of this country.

As a physician, I see this as a public health issue of monumental proportions that the politicians have chosen to ignore for various reasons.

The courts always held the opinion that the Second Amendment was tied to the state militia service; however, this was turned upside down when the U.S. Supreme Court overturned the District of Columbia vs. Heller 2008. This was further extended to apply to state and local laws in 2010 in the case of Donald vs. City of Chicago.

The Second Amendment states, “A well regulated militia being necessary to the security of a free state, the right of the people to keep and bear arms shall not be infringed.”

However, I’m not sure to which militia we belong. The armed forces and police forces are designed and well-trained to protect the country and its people now. The interpretations and the applications of the Second Amendment are to be determined by the people of this country who can insist legislators look beyond the politics and work on the solutions.

The courts, no doubt, will find a way to uphold appropriate decisions. No law is ever permanently settled and has to reflect current environments.

Although I am grateful to my patients for helping me heal, I or the patients should never be in these situations again. I do not want to mourn with my patients when a stray bullet kills a child at play or when their teenager is being identified in the morgue after going to the movies. The Sikh community continues to heal due largely to the tremendous support from all Americans.

We need to bear witness to the flow of blood from 30,000 people, including 500 children, year after year. It is time to act.