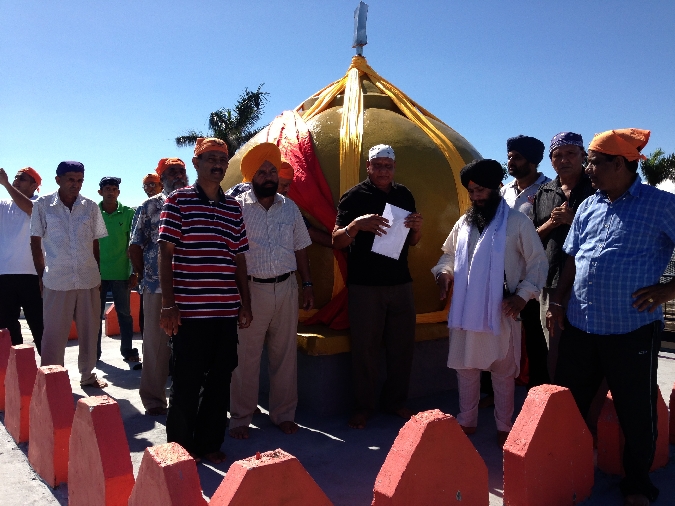 Comments Off on GUMBAD Feature For Lautoka Gurudwara Saheb 592 Views

California, USA: The Lautoka Gurdwara (FIJI) congregation is composed mostly of the Sikh populace from Sigatoka to part of BA and is rich with personal sacrifices of our ancestors in joyfully establishing the Gurdwara around 1933 and inspired re-building efforts following the arson attack of 1987.

Despite the economic and social hardships with minority factor as well, its exemplary to witness the Chardi Kala of Sikh community in expressing and keeping alive Baba Nanak’s golden motto of NAAM JAPNA, KIRT KARNI te VANDH CHAKNA.

Since yearly Vaisakhi joy always begins with respectful adornment of the Nashan Saheb, this year remains as vibrant as ever with the Nashan Saheb and Chola sewa expressing an exceptional zeal. We are proud of our religious heritage where the Nashan Saheb signifies that the command of the Gurus is prevalent in the Gurdwara and signals to the community at large that food and protection is available to the needy.

It is an honor to declare that Sardar Salendar Singh Lallian of Sacramento, California, USA (formerly of Lautoka, Fiji) has been graced to have offered the full cost of the construction of Gumbad (dome) on top the Lautoka Gurudwara Saheb Sach Khand, to consummate the crowning feature of the Gurudwara. The foundation stone was laid by Sardar Gurdev Singh Mandi.

Salendarji made a generous effort to recently travel to Fiji in celebrating the inauguration of the feature. He was bestowed a Saropa (shawl of honor) and an award of appreciation during the celebration. It goes beyond the expression of gratitude when Salendarji declared his personal desire to establish an exigency trust account for the upkeep of the Lautoka Gurudwara Saheb infrastructure.

Salendar’s family is characteristically devout of panthic love and progress and is on record to have been prime partners in the construction of the Sach Khand and the adjoining live-in Granthi complex at Lautoka Gurudwara Saheb with a significant cost of over $F170,000.

Previous: Artist’s ambitious project may get fillip from CM
Next: AISSF to start construction of Sikh genocide memorial at Hond-Chillar on Nov 2