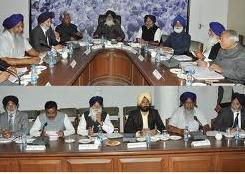 Gujarat Government braces itself for meeting with Badal on Sikh farmers

Ahmedabad, India:  The Gujarat Government is bracing itself for a meeting with Punjab Chief Minister Parkash Singh Badal on the issue of eviction of Sikh farmers from the border district of Kutch.

Badal is expected to take up the opportunity to discuss with his Gujarat counterpart Narendra Modi the grievances of the Sikh farmers. Modi, during his recent visit to Punjab, had assured Badal that his government would not take any step to throw out the Sikh farmers settled in Kutch and a decision on their future would be taken after the Supreme Court decision on a petition pending before it.

His assurance, however, has failed to re-assure the Sikh farmers of Kutch who point out that Modi should have directed the state government to withdraw the petition in the Supreme Court, if he was keen on resolving the issue.

Modi has not initiated any step to withdraw the petition challenging the Gujarat High Court’s verdict of 2010 that went in favour of the Sikh farmers in Kutch.

Though Modi claims that the “confusion” was caused by some “faulty amendments” in the state revenue Act made by the Congress government in the early seventies, it was only a couple of years ago under his administration that the district collector issued a notice to the 50,000-odd Sikh farmers in Kutch to vacate the land allocated to them five decades ago under a joint scheme state and central government scheme to re-settle farmers from Punjab and Haryana near the international border with Pakistan in Kutch.

The affected farmers challenged the collector’s notification, which barred the Sikh farmers from buying, selling or taking bank loans on the land allocated to them, in the High Court, which ruled in their favour last year. But the Modi Government has challenged the order in the Supreme Court.

While his government took a pro-active role to amend the Lokayukta Act to ensure that the Chief Minister had the final say in the selection of the Lokayukta, he has not initiated any step to remove the “confusion” from the revenue Act to help the Sikh farmers.

The exhibitions organised on the occasion of the Vibrant Gujarat Agricultural Summit, is expected to be visited by over one lakh farmers from the state and elsewhere. The farmers will get a chance to directly interact with companies dealing in seeds and other agricultural implements.