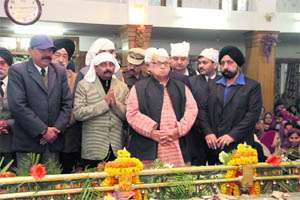 In his brief address, Governor Aziz Qureshi recalled the sacrifices made by Sikh Gurus in service of humanity. He called upon the people to follow the path shown by the great Sikh Gurus. Congress vice president Suryakant Dhasmana, also present, referred to incidents from the life of Guru Gobind Singh.

Earlier, Sukhmani Sahib paath was recited in the gurdwara in the early morning hours today, followed by head granti Buta Singh throwing light on the life of Guru Gobind Singh.

A mass feasting was organised at the gurdwara on the occasion which was attended by a large gathering. Gurdwara Shri Guru Singh Sabha president Rajendra Singh Rajan was present on the occasion