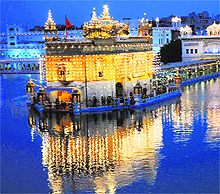 Golden Temple’s kitchen to be re-designed to check pollution

Amritsar, Punjab:  The free kitchen at the Golden Temple is a major pollutant, something that has been contributing to discolouration of the shrine’s gold-plating, a study conducted recently by the Indian Institute of Technology (IIT), New Delhi, has found. The institute suggested redesigning of the kitchen, an advice that the Shiromani Gurdwara Parbandhak Committee (SGPC) has already started working upon.

The study found that while sulphur dioxide and nitrogen dioxide concentrations were still within the ‘national ambient air quality standards’, but the particulate matter concentration — caused by re-suspension of road dust (47 per cent) and industry (31 per cent) — exceeded the norms.

Among the other pollutants are industrial stacks, vehicles, coal and wood-based restaurants and diesel-operated generators. The IIT was roped in for the study by the Punjab Pollution Control Board (PPCB).

SGPC secretary Tarlochan Singh said, “We have already started construction of the new kitchen block as per the PPCB suggestions.” He said every effort would be made to curtail pollution. He said they were also planning a vertical garden and a layer of plants in big pots around the Golden Temple for checking the problem.

A meeting of the PPCB, SGPC and the district administration officials was held here today to finalise action plan to counter the problem.

After the meeting, various departments, including the Municipal Corporation, Agriculture, Power Corporation, Transport and Police, were instructed to complete the tasks assigned to them well in time, said Deputy Commissioner Rajat Aggarwal.

PPCB chairman Ravinder Singh said vehicular traffic around the Golden Temple Complex was a cause for concern, something that the police and the municipal corporation authorities needed to work on.

Earlier, a city resident, Gursevak Singh, had filed a complaint with the Prime Minister and shared his concerns about the problem of pollution at the shrine. The Punjab and Haryana High Court had also taken a suo moto notice of his letter and admitted it as a civil writ petition. It was during a hearing of the case that the IIT was hired for the study. The next date of hearing in the case is on September 10.

Previous: Gujarat’s Sikh farmers say no to SAD help
Next: Minority Commission assures SGPC to look into the issues faced by Sikh community